Public opinion: What is it really worth?

By Cabot Institute for the Environment June 24, 2014
I recently attended a session at the House of Commons co-hosted by the All-Party Parliamentary Climate Change Group (APPCCG) and the Centre on Innovation and Energy Demand (CIED). The session tackled the topic of the UK’s “energy efficiency revolution”, and whether the UK is living up to the high standards expected by successive governments.

Energy efficiency is what is known as a demand-side measure in the language of energy policymakers. Making devices that use energy more efficient is one way of reducing demand for energy overall, and thus bringing the UK closer to its carbon reduction goals. Indeed, increasing energy efficiency is often regarded as one of the most cost-effective methods of carbon reduction.

An area of great interest to researchers in this field is human behaviour; how can people be induced to behave in a way that reduces their carbon emissions?

The ‘default’ reaction of governments when attempting to change the behaviour of their citizens is to provide financial incentives to encourage adoption of the desired behaviour. This is based on simple economic theory, and depends on the assumption that the average rational citizen will immediately drop undesirable habits as soon as it becomes financially worthwhile to do so.

An alternative view is that people are not swayed as heavily by financial motives as they are by their fundamental beliefs; if somebody is a firm believer in the cause of tackling climate change, they can be relied upon to adopt energy-saving behaviours sooner or later.

There is a fundamental tension between these two views of how humans behave. Energy policymakers often find themselves caught between these viewpoints, and this can cause delays and poor policy decisions. This is a question that clearly needs to be addressed by researchers.

Let’s take a closer look at this problem by using a simple mathematical model. Imagine that there is a new behaviour, perhaps a form of recycling, that the government is keen for people to adopt. Since it is brand new, almost nobody has heard of it, and even fewer people have actually adopted it.

In order to make this behaviour the norm, the government allocates some of its limited resources to the problem. These resources can either be spent on advertising, to win people over to the behaviour on ideological grounds, or can be spent on direct financial incentives. The government has to choose what proportion of the resources go towards advertising and incentives, based on the objective of full adoption of the behaviour as quickly as possible. 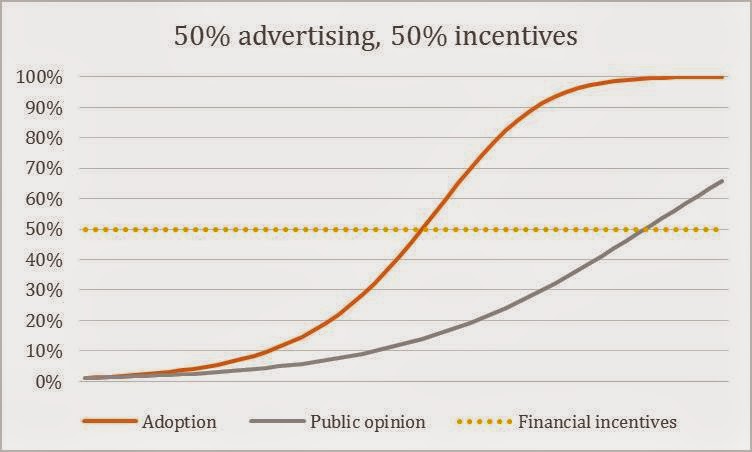 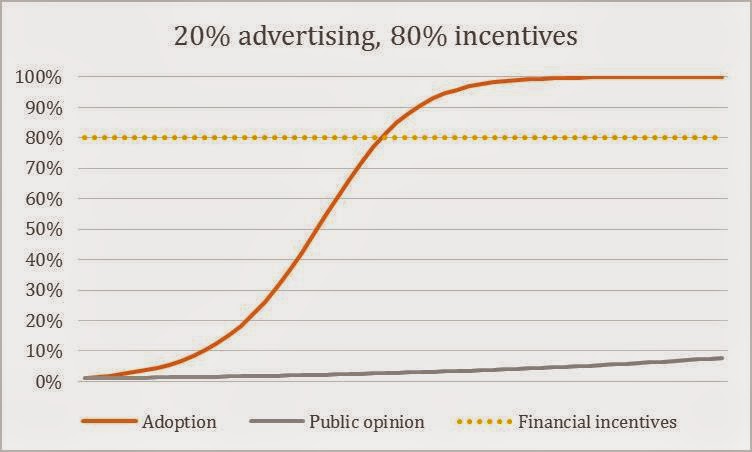 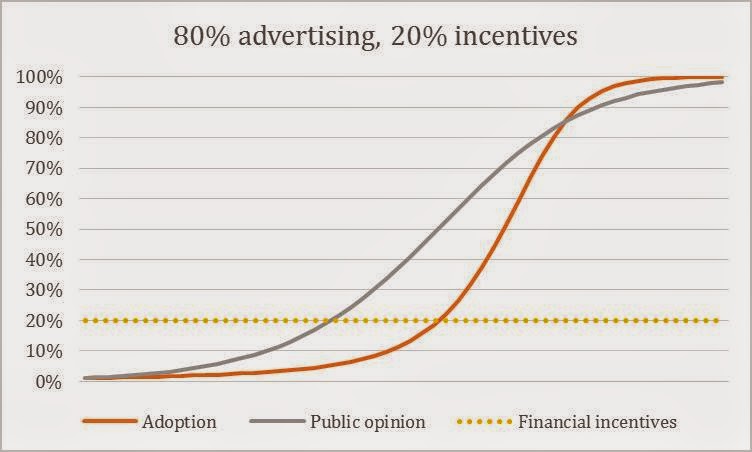 So what are the results of this simple model? It’s clear that using financial incentives causes the time needed to reach full adoption to become shorter. Therefore, should the government should always use financial incentives in order to reach its stated objectives as quickly as possible?

Unfortunately it isn't that simple. While it is true that the objective of full adoption is met quicker by using mostly financial incentives, the gap between ‘economic’ and ‘ideological’ adopters is large; it’s possible that many of the people who have adopted the behaviour will return to their old ways as soon as the incentives are taken away. It’s also worth considering the possibility that ideological adopters might also be easier to convince when it comes time to introduce the next energy-saving behaviour, whereas economic adopters would need to be paid off from scratch.

I should say at this point that this model is meant as a means of communicating a concept, and is an oversimplification of the way technology and belief adoption actually works. I've also chosen parameters for the model arbitrarily - choosing a different set of parameters or tweaking the model could result in radically different outcomes.

Nonetheless, the underlying tension remains; should we invest in changing people’s opinions, even if it’s a longer, costlier process? What is public opinion really worth?


It’s my sincere hope that researchers, be it from CIED, Cabot Institute or elsewhere, will be able to answer these questions in the years to come.

This blog is written by Cabot Institute member Neeraj Oak, the Chief Analyst and Energy Practice Lead at Shift Thought.