Building up solar power in Africa

By Cabot Institute for the Environment August 20, 2015 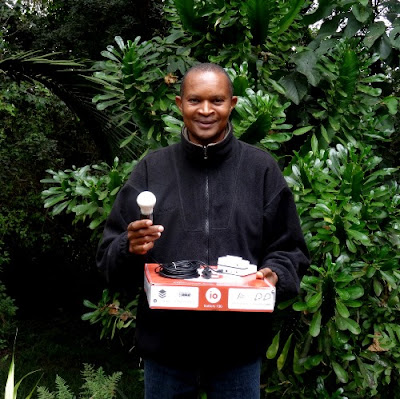 It's proving tough enough in the UK to increase the amount of renewable energy we use, and attempting this in Africa may seem like a pipe dream. However, six years ago, University of Bristol alumni Edward Matos (Engineering Design, 2009) and Oliver Kynaston (Physics, 2007), fresh faced out of their degrees, created a company to do just this.

Last month, I interviewed Oliver from his home in Tanzania and he gave me the low down on how it all happened.

It all started when Edward won £10K for his social enterprise idea in the 2009 Bristol New Enterprise Competition hosted by RED (Research and Enterprise Development) at the University of Bristol. The basic plan was to design and disseminate biodigesters amongst the rural poor of developing countries that would produce clean fuel for cooking and heating from livestock excrement; thereby avoiding the need to burn firewood in the home. Inhaling smoke in the home causes acute respiratory infections and in Africa alone, this causes more than 400,000 people, mostly children, to die every year.

Intrigued to find out if his idea was at all feasible, Edward flew out to Tanzania for two weeks for a business research trip. Oliver was working at a renewable energy company in the UK at the time and upon Edwards return, he joined Edward in a pub in Bristol for an informal chat. Reminiscing over this meeting Oliver tells me that at as they got talking about the possibilities, they both thought: “May be, may be we could just do this.” By the age of 25 the pair had formed Shamba Technologies, a renewable energy company in Tanzania.

In the early stages of the company, they lived on a farm in rural Tanzania in order to test their products for the local market. This was a crucial step that Oliver and Edward took because only by putting themselves in the shoes of their target market could they design products that were appropriate for low-income households.

Although Shamba Technologies started off with biodigesters, the company has now focussed on a new product that generates electricity from solar power. Increasing access to electricity is key to reducing poverty: health, education and communication can be greatly improved. In Tanzania, 15% of the population have access to electricity and there isn't any semblance of an electrical grid outside of the cities. Therefore, products that can provide clean electrical power off-grid are pivotal in lifting millions of people out of poverty.

Oliver tells me that there have been three key technological advances which have paved the way to being able to develop such a product: solar panels, LEDs and batteries. They have all become more effective and cheaper over the years. Using these components, Shamba Technologies have developed a domestic solar product with an interesting design feature: the product can be bought in affordable chunks and assembled like Lego. In fact, Oliver says that this modular design was influenced by observing how a Tanzanian built their houses near their farm.

“One day the foundations were laid and they were left for a few months, then some trucks came along with bricks and a few layers were laid down. A further six months went by, weeds started growing on the unfinished walls and we'd thought the building had been abandoned, but sure enough they came back with more bricks.”

This erratic building schedule is reflected in how Tanzanians spend their money. A stable wage with an hourly rate is hard to come by in Tanzania, and workers usually get paid in lump sums for a period of work or after selling farm produce. Given the lack of secure banking in Tanzania, it is prudent to turn your money into assets as soon as possible. So a Tanzanian would buy as many bricks as their money can allow, lay them on their house and then wait for the next pay packet.

The modular design of the solar energy product that Shamba Technologies have developed is a brilliant example of how Oliver and Edward have really understood and listened to their market. This underlying ethos of their company has put them in good stead for future success in the renewable energy market in Africa.

At present, Oliver still lives in Tanzania carrying out market trials of their products and Edward has recently returned from a year in China where he has been learning how to decrease the cost of their products through mass-manufacture. Shamba Technologies have high hopes for the future and would like to be at the forefront of Africa’s renewable energy sector in the next 10 years.