By Cabot Institute for the Environment August 07, 2017
Sunflowerfest is an annual three-day festival of music and art held just outside Lisburn, Northern Ireland, priding itself on its family friendly atmosphere and sprawling spectrum of creative activities. Unlike the monster festivals that are held in other parts of the UK, in Northern Ireland our festivals are small (think a few thousand people, not a few hundred-thousand) with a strong focus on local talent. The perfect place for some experimental, creative science outreach…

In 2016, I contacted the organisers and floated the idea of a science outreach stall based upon my research and others in BRIDGE and the Cabot Institute. The idea, called Living Earth, was new, reasonably grand and completely untested. The response was a very enthusiastic “yes please!”

So, last year a squad of five outreachers (Alan Kennedy, Emily White and Michael Cooper of the Cabot Institute, plus Dewi Owen and Zuleika Gregory our puppeteers) arrived in blustery Northern Ireland and over the course of the festival recreated the entire history of Earth. 4.5 billion years in 3 days. With the help of punters at the festival, we built a 1.5 m diameter model of the Earth out of willow, foliage, recycled and craft materials. As the Earth was built, we recreated many of the major processes and events that shape it today, from the placement of the continents, the expansion of biomes and climate zones, the formation of the cryosphere and the destruction of the Anthropocene. 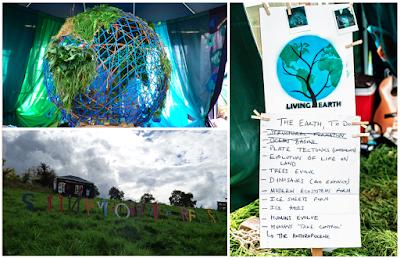 As well as this geological ‘Big Art Attack’, crafts and a puppet show entitled This Soup Tastes Funny! about the evolution of life were put on in the festival’s dedicated Kids Zone. Our puppets, Doug and Barry, had to travel back in time to the primordial soup and race through evolution in order to relive the first day of the festival. Five time periods, four puppet costume changes, asteroid impacts, crowd participation and even a song left the young audience both entertained, but also possibly very confused… That’s a lot of science to take on-board in 15 minutes!

We (and our marquee) got battered by wind, rain and the exhausting amount of activities we were juggling, including our recreational ‘time off’. However, we certainly offered something unique at the festival and left a positive impression with the organisers:

“Just to say THANK YOU to you and the crew for all the great things you did at Sunflowerfest. So appreciate everything you do and did. We would always welcome you back to do whatever you would like!” – Vanessa, Sunflowerfest Organiser

Now, I have quite an active imagination, so that last sentence was a dangerously open invitation… With 2017’s festival theme being ‘a parallel universe’, I thought something immersive on the theme of deep time would fit right in. The new plan was to build a time machine! Or in other words transform the inside of a marquee into a jungle, to show what Ireland would have been like during the hot Eocene period ~50 million years ago. As I wrote down a proposal for the festival application, this seemed like it would be reasonably straightforward compared to 2016. In hindsight, I misjudged that.

Logistically, constructing a jungle was only possible because my mum had recently had some trees in the garden felled and she also had several hedges needing cut back. A supply of logs and some waxy leafed laurel and bay that would hold their colour after cutting for the duration of the festival made a good, but somewhat bulky start. These were attached to the marquee ceiling and a heavy metal tripod to give us a central ‘tree’ and performance space to demonstrate some tectonic themed experiments. Ferns and other leafy plants were then dug up and temporarily housed in buckets to fill out the back of the tent and childhood toys added around the stall for the jungle fauna. Finally, a small speaker playing jungle sound effects was hidden up in the canopy to complete the experience. 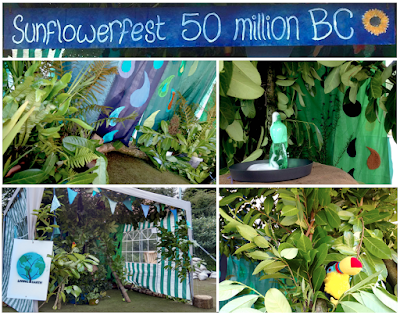 Obviously, a hearty dose of imagination was required to convince yourself our locally sourced, temperate vegetation was an Eocene jungle, but luckily this year our stand was based entirely in the Kids Zone, where imagination is not in short supply. Ideally, I wanted to have a Superser heater in the back of the tent to raise the temperature to 35 °C, but doubted that would pass the risk assessment. We settled for having the ambient Northern Irish temperature, but luckily, we did have a few biblically heavy rain showers to give it a nice wet rainforest feel. It took three days of preparation, cutting, digging and replanting vegetation, and five hours of construction, but eventually we had the most eye-catching stand in the whole Kids Zone. It was pretty much the Eocene.

In our jungle, we had information about how Ireland has changed over the past billion years, a floating plate tectonics game and crafted fossils and jungle wildlife to decorate the stand, all of which kept us mostly run off our feet during our three-hour slots each day. Our flagship performance however, was a bicarbonate soda-vinegar erupting volcano, as ~50 million years ago Northern Ireland was at the centre of lots of volcanic activity, forming for example the Giant’s Causeway. Without a single trial run (we spent all of our preparation time building the jungle), our resident chemistry undergraduate, Oliver Feighan, carried out the experiment in front of an audience 40 strong. It was possibly the least explosive or inspiring volcano in the world. As the foam dribbled out the top of the bottle it was met with a slow and bemused round of applause. Those kids will definitely go on to be the environmental scientists of the future.

Creative outreach at big events may not always go quite to plan, it takes time and effort and you can sometimes bite off more than you can chew, but it’s a great way reframe the relevance of research in a totally different way, speak to a new audience (a very bohemian crowd, in the case of Sunflowerfest) and just do something fun. It’s not often families can experience palaeoclimate, tribal drumming circles and the Rubberbandits* all in one day. We ended up going on to run the globe building activity from 2016 at a further two events (you can see a highlight video of the almost finished piece here). Although kids and parents found 2017’s time machine a lot of fun and it looked surprisingly effective, unfortunately I don’t think I will have time or energy to ever recreate the Eocene again! However, while I may be leaving the Eocene in the past, I highly doubt this will be my last Sunflowerfest.