By Cabot Institute for the Environment October 25, 2017

In 2015, Bristol was the UK’s first European Green Capital. During the year, HEFCE’s Catalyst Fund backed an initiative between the University of Bristol and the University of the West of England Bristol to promote student involvement in green activities.

In cities and communities across the world, students form a significant, but often neglected part of the population. Seen as transient, they are easy for cities to ignore. Yet in Bristol they form nearly 10% of the population, offering vision and energy to the city. In a unique collaboration between the two universities in Bristol, student unions, the Bristol City Council and a network of over 800 local organisations, Green Capital: Student Capital was designed to unleash the power of Bristol’s students.

Green Capital: Student Capital initiated, promoted and celebrated student engagement with sustainability across the city region. Much of the work comprised novel initiatives co-created by students with community groups and SMEs such as:


Green Capital: Student Capital linked students with wildlife conservation groups, local businesses, local community groups, local schools and colleges, student societies, charities and NGOs, healthcare providers and many more local organisations. By creating a vibrant network with community groups, public bodies and small and medium enterprises (SMEs), the first year of the project saw students giving over 125,000 hours of their time to sustainability volunteering, placements, internships, and projects. That amounts to over 72 years’ worth of work and over £1.2 million of economic contribution to the city.

Over 7,000 students took part in the first year and hundreds of students have been awarded the Green Capital Change Maker award for their work. This award was specially created for the project and recognises students’ passion and commitment to making a difference in their city.

To ensure that work can continue, both universities have established a joint SkillsBridge platform, which links the community and students. This enables students to find ways to help in the community, and enables the community to find students who are keen to help.

Students themselves have been very positive about the impact upon them. They have learnt skills, gained practical experience and made new connections. It has enhanced the employability of participants and, through the application of their energy and knowledge to resolve sustainability challenges, it has created a community of student Change Makers who will carry forward the positive experiences into their future professional and private lives. It has contributed to change in Bristol and fostered new connections between residents and the universities. Equally importantly, the project has increased students’ sense of belonging, which contributes directly to their wellbeing. This has been particularly important to international students, who took part in disproportionately large numbers (41% of participants) and reported feeling that they belonged and had a much fuller understanding of Britain as they volunteered in communities across the city. 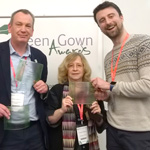 In November 2016, the project was awarded the UK and Ireland Green Gown for Student Engagement. In March 2017, the project won an International Green Gown award against competition from across the globe. The awards recognise exceptional sustainability initiatives in higher and further education institutions. The judges described the winning entry as a dynamic city-wide project with a direct impact on graduate employability.


Working together is essential

The two universities and two unions worked closely together, but in a much broader sense all partners were involved in the process of student engagement, from the external organisations and local authorities to the students themselves.

Ongoing engagement is crucial to a successful legacy.

Bristol’s Green Capital 2015 year provided a fantastic opportunity to showcase the city’s sustainability credentials and to act as a catalyst for sustainability action. But we needed to create lasting change. Right from the outset, the project was designed with its legacy in mind – for Bristol and other cities.

Green Capital: Student Capital is testament to the success of the European Green Capital 2015 year, to the merit of the HEFCE Catalyst Fund and to the value of the student higher education community as a real force for practical change in our cities.