My Reflections on COP23 – challenges, inspiration, and hopes for the future

By Cabot Institute for the Environment November 22, 2017 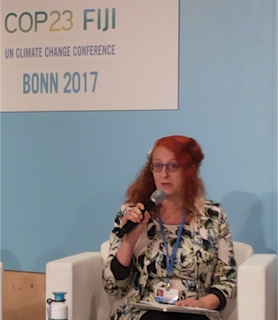 I had the great pleasure of attending COP21 in Paris, 2015. The air was full of anticipation, hope and a clear sense of urgency. The achievements of the conference were remarkable and as a climate scientist I felt a degree of reassurance (albeit uneasy reassurance) that there was now a serious global commitment that may lead to a turning point in climate action.

Two years on, I was therefore excited to attend COP23 in Bonn as part of the IPCC (Intergovernmental Panel on Climate Change) delegation, to see how things were progressing.

I was immediately struck by the difference. The negotiations here were largely focussed on how to implement the Paris Agreement. The discussion were necessarily more technical, but less awe-inspiring, ‘nuts and bolts’. Without the big deadline and the huge public pressure to sign a global agreement, it seems things in the negotiations moved slowly, and there was an air of frustration amongst some negotiators and campaigners.

Despite the slow pace in the negotiations, this blog shares some real highlights from the week, as well as some low lights, alongside my thoughts on proceedings.

COP23 started with an announcement from Syria that they would sign the Paris Agreement, leaving the USA isolated as the only country that will not be part of the Agreement – Trump’s announcement to withdraw from the Agreement offers a stark reminder of the impact of domestic political change on international initiatives.
It was however encouraging to go to the launch of the US #wearestillin campaign – a collection of states, cities, businesses, NGOs, civil society etc that are willing to make a commitment to climate change despite Trump pulling out of the Paris Agreement. With Bloomberg having offered to cover for the USA’s climate finance and on our side of the pond, Macron offering to cover their commitments to the IPCC (with a little top up also from the UK government).

Despite anticipating that the US delegation might join Saudia Arabia and others to stall progress, they sent the usual negotiators who were being helpful in the side-lines, if quiet during decisions. China, on the other hand, were not being as constructive as they could have…..

Finance is always one of the biggest sticking points of negotiations, and this year was no different. China (and others) want America to put up large sums of climate finance (to fund adaptation and mitigation in other countries), taking historical responsibility for their emissions, but America will not do this. Even Obama, who strongly supported Paris, would not agree to take responsibility for emissions before there was widespread acceptance of on climate change being anthropogenic.

In the past, developed and developing countries had differentiated responsibilities for mitigation of climate change, reflecting their different historical contributions and capabilities. Only “Annex I” (“developed”) countries such as the EU, USA and Canada had mitigation targets and financial opbligations under the Kyoto Protocol. Economies in Transition (such as China) and developing countries did not. Moving forward in Paris, the process of countries setting their own targets (Nationally Determined Contributions) gave all countries responsibilities but also control over their own action, reducing the need for formalised differentiation.

China remains keen to retain formal differentiation, but many at the conference began to question the legitimacy of China’s appeals for finance and differentiation when they have become the largest pollution nation (albeit with lower per capita emissions that America) and one of the most rapidly growing economies.

Reconnecting with the lived experience of climate change

There was an overwhelming number of science talks at a huge verity of side events. For me though, the best thing about COP was the opportunity to mix with people, hear stories and go to talks that I wouldn’t normally get the chance to. It takes me away from my number crunching to hear how people are experiencing climate change, to talk about the realities of adaption and mitigation, to remind us how the world really works outside of computer models.

Talking to a young African man and an indigenous Guatemalan woman about how people are experiencing climate change now, they explained that people often don’t really know that that is the reason their crops have failed three years running, or there are more regular storms of higher intensity, or their houses are washing away. They are worrying how to feed themselves and pay for their kids to go to school. They are not concerned with how they can mitigate climate change, but how they can live.

Developing countries and indigenous groups attended in force, raising awareness of how climate change is affecting them now, and demanding action. These groups reconnected us with the urgency of the task at hand, and with the talks under the Presidency of Fiji this year, there was a loud and passionate voice from the Pacific Islands. Many islanders are already having to leave their homes due to sea level rise, salt water inundation of crops and drinking water aquifers - not to mention the series of increasingly frequent and devastating storms. One of the Island country negotiators told me that many other countries were keen to gain the favour of the Pacific Islands as the many countries (and therefore many votes) could lead them to become a powerful influencer.

A triumph or misfortune of participation?

One news article noted the five largest delegations were from African countries (nearly 500 from Cote d’Ivoire). While on the surface this is a major accomplishment, there were mutterings in the conference from younger African delegates that some senior colleagues had little interest in proceedings. While the importance of gender issues and climate was a major issue on the table at COP23, the proceedings also reflected other revelations of sexual misconduct with complaints of senior powerful male figures taking advantage of young female staff.

All in all, I have not come away from COP23 with the sense of achievement and exhilaration at the end of COP21 Paris, but a sense of urgency of the need to make it happen faster.

As Kevin Anderson from Tyndall said to me - we have known about this for some time now and yet we are failing, every one of us, to make anything happen at the scale and rate it needs to.

As I claw for answers on how to achieve this, I’m reminded that this year at COP there was a focus on youth. I saw some amazing youth speakers and participants, including one of our 3rd year undergraduate geography students. I also met two of our recent MSc graduates, one who was on the Mexican Delegation and one working for and NGO Climate Action Network.

I take great inspiration from these hugely talented young people, and they, alongside the impassioned and increasingly powerful voices of developing nations, offer hope. Whilst the responsibility for dealing with the implications of climate change should not rest solely in their hands – the devolution of power/ resource to those with fresh ideas and approaches could be exactly what we need to catalyse change.