What Al Gore taught me about effective climate change communication

By Cabot Institute for the Environment November 07, 2018 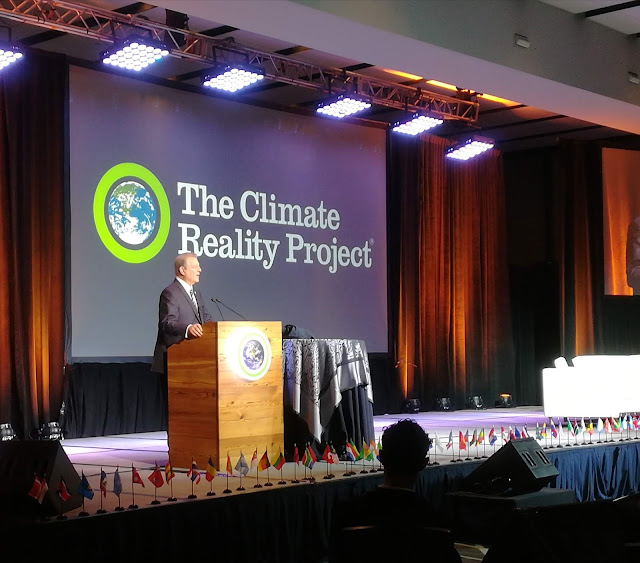 Solutions to the climate crisis are within reach, but in order to capture them, we must take urgent action today across every level of society.

Al Gore has always been a hero of mine. I distinctly remember watching ‘An Inconvenient Truth’ for the first time and the profound impact that it had on my view of the world. I personally believe that what Al Gore has done for the awareness of climate change is up there with the contributions of Martin Luther King Jr. to the civil rights movement and Nelson Mandela to the abolition of apartheid. In fact, I have pictures of all three in my bedroom (sad, I know…). Often, they will cast judgemental looks from the side of the room and mutter under their breath that I haven’t made enough of a contribution to humankind today! I find that having such tough critics of my moral compass omnipresent often gives me a little more impetus to do something positive and temporarily clear my conscience.

After dragging my family along to the cinema in September 2017 to watch Al Gore’s moving sequel to ‘An Inconvenient Truth’, I decided to apply to the Climate Reality Training Programme – a training course delivered by Mr. Gore and his team to train individuals about the intricacies of public climate change communication and instigating change in your local community – perfect! Never in a million years did I think that Osh from West Wales would be selected, but so I was.

The training took place in Mexico City and I was lucky enough to use scholarship funding from the Royal Academy of Engineering to pay for my flights and accommodation. The training itself was run for free by Mr. Gore’s charity, The Climate Reality Leadership Training Corps.

Believe in the power of your own voice. The more noise you make, the more accountability you demand from your leaders, the more our world will change for better.

I arrived in Mexico City unsure of what to expect. I had read all the pre-material on the flight (in and around a binge watch of the latest movies… as you do), but I was still pretty apprehensive. Luckily, the moment I arrived at the conference and started chatting to the other delegates, I realised that I was surrounded by people just like me from all over the world – a load of enthusiastic tree-huggers looking to do a little bit more than using a bag-for-life at Sainsburys, a keep-cup at Costa and a passive-aggressive tone with housemates about the recycling – I was in my element.

The first session of the day was opened by the man himself, Mr. Gore. He delivered a powerful and poignant speech to begin the training. He talked about the severity of the current situation and the growing need to act:


He then went on to talk about some of the devastating consequences that we have already observed. Notably, he drew links between changes in climate to both the ‘Syrian Refugee Crisis’ and the ‘Beast from the East’:

The Beast from the East

Of course, no speech about climate change would be complete without mentioning everybody’s favourite antagonist – yep, you guessed it… Donald Trump. Simply mentioning the name of Trump in a room full of environmentalists was bound to get a laugh. Mr Gore summed it up concisely:

We need to put a price on carbon in the markets, and a price on denial in politics.

However, as has become a trademark of Mr. Gore’s speeches over the years, he didn’t leave his audience in the depths of despair about the mess that we find ourselves in. He went on to talk about the positive news and the reasons for hope:


Needless to say, it was incredible to watch the passion and conviction with which Mr. Gore delivered his material. He is a truly gifted orator. Communicating the harsh realities of climate change, coupled with the strong message for hope was something that really gave Mr. Gore’s presentation weight. Rather than feeling depressed about the situation, as is often the case when listening to a speech about climate change, this speech left me feeling empowered. Striking this fine balance was a key emphasis of the training to follow.

The next few days of the training flew by in a blur of presentation coaching, climate change and solutions workshops, networking events and various other activities. It was truly inspiring to learn about all the incredible things that people had achieved in their own respective communities. A key aspect of the training was the commitment required following the event. We each had to commit to making 10 ‘acts of leadership’ once we arrived back at home. This could include contacting our local MP to discuss climate change, delivering presentations on the subject, arranging events and so forth.

So far, I have delivered a presentation to my fellow Royal Academy of Engineering scholars and contacted both my Member of Parliament and my Welsh Assembly Member. I have arranged to meet my MP in Westminster, and I intend to present to him about climate change and urge him to instigate action. For my other acts of leadership, I intend to present at a series of secondary schools. I have been lucky enough to be elected Engineers Without Borders’ Outreach Officer for this year, and we have 6 school visits in the pipeline for the Bristol area. I have also organised to go back to my own secondary school in West Wales to present. 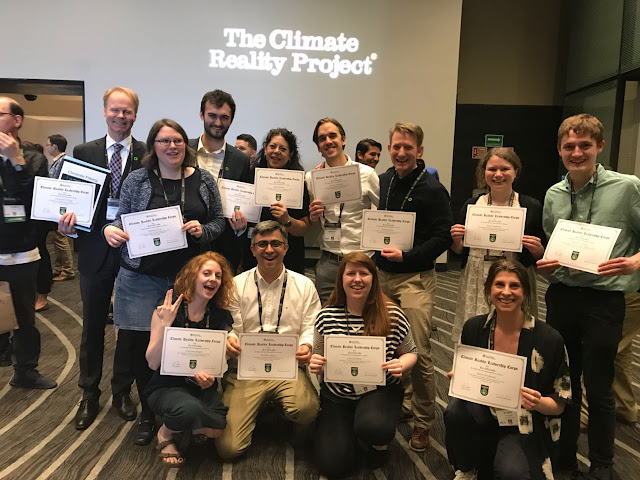 Overall, the training was an incredible experience – something that I have taken a lot away from, both in terms of the knowledge and confidence that I have gained to present about climate change and the lasting friendships that I have made with other delegates. I would urge anybody passionate about tackling climate change to attend a training course run by the Climate Reality Leadership Corps (a link to their site to find out about the next training can be found here).

I’d like to leave you with a list of actions that we can all do as individuals to make an impact:


Will our children ask, why didn’t you act? Or will they ask, how did you find the moral courage to rise up and change?

Please feel free to contact me with any questions at: osianllyrrees@gmail.com