By Cabot Institute for the Environment October 17, 2012

The 16th Chatham House Climate Change conference, this year themed around questions of security, resilience and diplomacy, took place in a mixed atmosphere of urgency, hope and frustration. It is a striking fact that global greenhouse gas emissions have remained on a steep upward trajectory since 1990. Global energy demands are increasing and a growing global population looks set to intensify these pressures still further. In this context, there was consensus on the need for drastic action to control emissions if there is to be any chance of limiting global temperature increase to 2°C above pre-industrial rates.  There was hope of the promise offered by new technologies such as carbon capture and storage; hope too of a new determination amongst states to tackle emissions through the UNFCCC process by 2020, but also a tangible sense of frustration at the further lost years this timescale implied and a lingering fear that it might already be too late to make a difference. As one speaker put it, ‘the boat left a while ago’, but the sheer scale and urgency of the challenge is such that we still cannot afford to get left behind.

Rising global temperatures will have a profound impact on the security of many populations and countries in the world. Certainly, climate change has the potential to open up new areas of competition and dispute between state actors, with several presentations making reference to the potential for geopolitical competition for newly accessible arctic resources. Others suggested the emergence of novel governance challenges and the inadequacy of existing international regimes and structures to deal with them. The consequences of sea level rise for the 200 mile exclusive economic zones which exist off states’ coastlines is just one example of these new challenges, with coastal retreat and the submergence of low lying islands threatening to reshape the geopolitical and geoeconomic contours of maritime sovereignty and the resource claims (fisheries, oil and gas) which go alongside them. 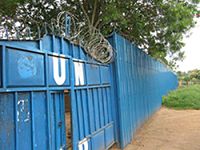 Yet the global insecurities that seem likely to be impacted by climate change are necessarily – and perhaps fundamentally – about much more than competition between states for resources, or even armed conflict per se. Extreme weather events have already caused global increases in food prices in 2008 and 2011, exacerbating underlying human insecurities amongst vulnerable populations; most likely contributing to famine in East Africa and perhaps even to the events of the Arab Spring. These vulnerabilities seem likely to intensify in the coming decades and similar challenges seem probable with regard to fresh water resources and increased migration away from unviable areas as existing coping mechanisms prove unable to adapt to new circumstances. While such insecurities may be intensified by the pressures of climate change, the challenges they induce are ultimately rooted in the social and political context of the countries in which they unfold. Not all states and political systems (or groups within these states) will be equally exposed to and able to cope with climate change-induced insecurities, with the greatest impact likely to fall those regions and populations which are already most vulnerable and face the greatest challenges of development and governance.

Indeed, for many speakers, issues of governance were at the heart of the climate change challenge, both in terms of national and local preparedness, vulnerabilities and resilience, but also internationally in terms of the steps required to restrain it. There was consensus that the geopolitical context has also changed profoundly since the signing of the Kyoto protocol in 1997. Most significantly, the continuing rapid economic development of the BRIC states (Brazil, Russia, India and China) and of others such as Indonesia, have not only intensified the drivers of global emissions through their rapid industrialisation, but also introduced significant new and influential interests into global climate governance. The dilemma of how to deliver on the twin goals economic growth on the one hand and emissions controls on the other has thus if anything become more complex and contested than in previous years, as the failed UN climate negotiations in Copenhagen so clearly illustrate.

Even so, a number of presenters warned against making simplistic distinctions between so-called developed and developing worlds in this respect. China may now be the largest greenhouse case emitter, but the interdependence of the global economy means that so much of the manufacturing activity which drives its industrial growth is itself a response to consumption in the United States and Europe. While some western countries (such as the UK) may have been able to reduce their own greenhouse gas emissions, in many cases, this has been a consequence of effectively transferring polluting activity elsewhere. The UK still consumes plenty of steel for example, but most of this is now imported from China rather than manufactured indigenously in south Wales.  In this spirit, a number of speakers called for a shift from targets based on greenhouse gas production to targets based on consumption, a more punitive global carbon pricing scheme on the same basis, the pressing need for investment both current and future renewable energy technologies and energy efficiency and the hope that developing countries may be able to leapfrog the mistakes of the west in their own industrial growth.

Yet throughout the conference, there was a sense of a ghost at the table. Despite all the political and financial efforts that have been put into tacking climate change and all the political exhortations to change, consumption continues to rise,  global emissions continue to increase and firm global commitments to change remain elusive. In this context, there remains a real question over the extent to which technical solutions to climate change – rather than more fundamental changes in global patterns of consumption – will be able to arrest these changes in time to make a difference.  In the absence of more deep-seated change in the underlying drivers of global emissions and in the face of continuing structural inertias in the global governance of the climate, an increase in global temperatures of over 2°C  seems to be shifting from possibility to likelihood, and the consequences of this are both uncertain and potentially vast in scale. In this context, efforts to mitigate climate change remain more pressing than ever, but the pressures of more radical adaptation may soon become overwhelming too.