'Bleeting' on about climate change

By Cabot Institute for the Environment November 12, 2012 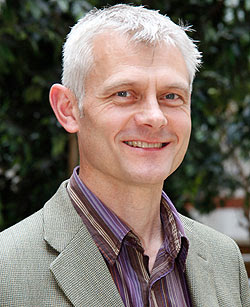 This week we held our Annual Lecture with special guest Kevin Anderson from the Tyndall Centre at the University of Manchester. As I was helping out at the event, I didn’t get to see all of it (I’ll be watching it online when the video is posted) so I thought instead I would share with you some of the tweets and comments received from members of the public who attended the event.

We handed out postcards on the night with two sides, one asking what had inspired you this evening and the other side asking what will you do as a result? We had a very diverse audience with people from government, charities and NGOs, education, health, and sustainability organisations. This lead to some very diverse responses. Some were interesting, relevant and empowering. Others were depressing, shocking or hopeless. This in itself shows the problems that we face in communicating climate change to people who are from different backgrounds, with different beliefs and different personal levels of optimism, pessimism and realism.

Kevin Anderson was quite blunt in explaining that if we keep doing what we’re doing and don’t make any changes to our lives now to make them more energy efficient and sustainable, then climate change will cause at least 4 - 6 degrees of warming with potentially horrendous consequences for the people and biodiversity of the world.

Some interesting tweets came through Twitter on the night and the days that followed, showing that the outcome of the event had stuck in people’s minds.

“The fiction of climate science -in particular emission modelling is hard wired by policy paymasters.K. Anderson”

“Looking for good news that humans aren't doomed, but not hopeful!”

“well, #cabot2012 was extremely interesting, sobering and downright scary. My summary - don't bank on your grandkids having a planet.”

“Looking for optimism but ending in pessimism...”

“Kevin Anderson blowing apart any notion of limiting global temp rise to 2C as a realistic goal. 4,5 or even 6 far more likely. #cabot2012”

“Key questions @cabotinstitute ... How can we frame the issue for people who would avert their attention? Including us? Lots on rule...”

“Well done #Cabot2012 for hosting Kevin Anderson's challenging lecture today! His is a message we, as scientists, should be listening to.”

“Kevin Anderson: "There are lots of things we can do, both from the bottom-up and the top-down." #Cabot2012”

“Strange that so many climate change scientists persist in flying to international conferences. Great talk from Kevin Anderson #cabot2012”

The remarks on the postcards were just as varied. What follows are the responses from a random selection of postcards filled in by attendees on the night.

What inspired you this evening?

“Driving certain cars on the market would reduce emissions by 40 -50%”.

“Why can’t we stop having babies?”

“The feisty nature of the audience”

“Confirmation that we need to act”

“Kevin was willing and determined to be honest”

“That real change is possible through simple things such as stopping flying, walking and cycling to get around”

What will you do as a result?

“I would like to see the Cabot Institute commit to the values it appears to espouse by reducing emissions from its events and research as much as possible – e.g. by not flying academics to climate change conferences”

“Talk to people who are not already converted”

“Spread the word and read up more about climate change”

“Support/lobby MP and continue to strive for greener low carbon lifestyle. Influence others.”

“Try to stop flying. Try to shop more by bicycle rather than driving”.

It is refreshing to see a group of randomly selected respondents who want to make a change. The main message that came out of Kevin Anderson’s talk was to spread the word and educate others in the hope of reducing emissions in our everyday lives.

You can read all the responses from the event here

Did you go to the Kevin Anderson event? What do you think of everyone’s responses above? Is it what you expected? Is there something that hasn’t been said? Feel free to comment on this blog, we would love to hear your opinions.

Interesting article from Ben Connor 'The art of burying your head in the sand'in reference to Kevin Anderson's talk.

Read Craig Comstock's blog piece about the event in the Huffington Post.