Prospects for Paris 2015: some thoughts on climate risk management with heterogeneous countries

By Amanda Woodman-Hardy August 01, 2014
Dr. Simon Buckle, Policy Director of the Grantham Institute for Climate Change (Imperial College), presented at the Cabot Institute his view about credible and viable mitigation commitments in view of the COP 21 on Climate Change that will take place in Paris in 2015. Dr. Buckle’s presentation developed around a political question: do countries want the same climate? In particular, he explained that countries have different attitudes towards risks and this, coupled with the absence of a supranational legal authority, makes climate negotiations particularly complex. So far, such different priorities have caused the failure of UN international negotiations on climate, and countries have systematically missed their targets to limit their carbon emissions. In spite of this, media coverage and public engagement in this topic are sluggish and this undermines the effectiveness of climate policies. I think that the political nature of the issue should be highlighted and critically explored even when presenting climate and economic models, and that’s why Dr. Buckle’s presentation was particularly insightful.


The climate challenge represents a global issue whose effects in the long-term are potentially irreversible. Moreover, the last IPCC report concluded that it is absolutely mandatory to reach an agreement on mitigation; this means that countries will have to agree not only on emissions reduction targets but also on responsibilities and burden sharing. In 1992 the UN Framework Convention on Climate Change established the principle of “common but differentiated responsibilities”, but today it is still contested how responsibilities should be concretely allocated. In fact, the actions that emitters should take to tackle global warming raise fundamental political issues of intra-generational and inter-generational equity. They would require combined efforts to limit carbon emissions and reduce the use of fossil fuels, which represent an integral part of the economic growth and, therefore, are likely to affect the trajectory of a country’s development.

The potential responses can be based on mitigation (the transformation to a low-emission economy to reduce climate risks); adaptation (limit losses through increased resilience) or geo-engineering (for instance, solar radiation management or carbon capture and storage). In engaging with the question about the degree to which we should act on mitigation, economists prescribe different models that take into account, for instance, how economic growth is modelled, or how climate change affects output and growth, whether there are thresholds or other assumptions on ecosystem services. This highlights the political nature of the matter. In fact, the empirical evidence on impacts of climate variability and change and the effectiveness of adaptation is limited and while recent studies (Dell et al. 2012; Brown et al. 2013; Hallegatte et al. 2013) discuss the impacts on growth of climate change, there are not real analogues of large-scale climate change to inform economic models. This means that policies on climate change should be based on a political judgment about risk management, not exclusively on a technical cost-benefit analysis.


Dr. Buckle investigates the reasons that have so far lead to the failure of international negotiations on climate. In particular, he developed a stylised model that captures, directly and analytically, the trade off between consumption and the impact of climate damages on the long-term value of a bequest to future generations and how this depends on initial endowments (Buckle et al. 2014). The model relates to international negotiations as it defines a new metric, the desired mitigation efforts, to evaluate countries’ mitigation commitments and informs international actors about the best strategic negotiating aim.

Ideally, the parties involved in the UN negotiations on climate should aim at becoming resilient low-carbon economies, but they differ on many dimensions that might hamper the success of the negotiations. In the view of overcoming this conundrum, Dr. Buckle’s model suggests that a degree of convergence between the parties would deliver the best credible commitment to emissions reduction. In particular, using Game theory considerations, he showed that such convergence would secure a Cournot outcome “where each country determines its own level of mitigation effort taking that of the other country as given” (Buckle et al. 2014:4) and would avoid the risk of a Stackelberg outcome, whereby a small group of major emitters impose their preferred level of climate risk to the international community. 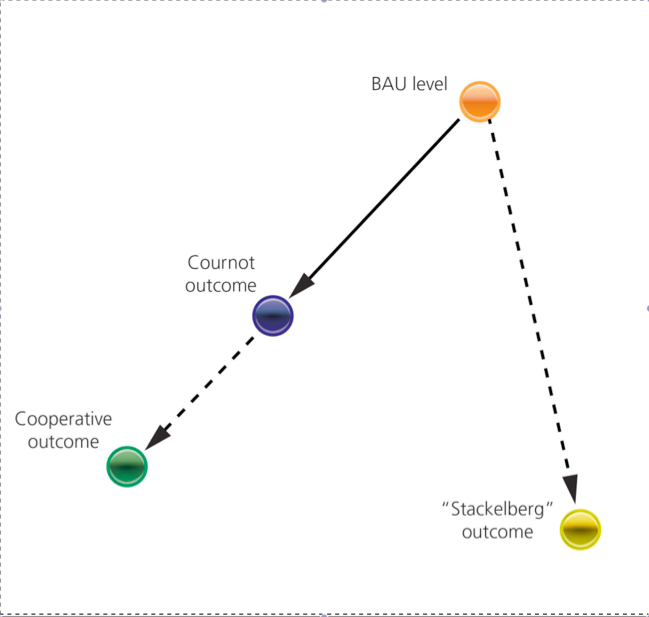 While it’s true that a Cournot agreement is sub-optimal and, as such, insufficient to deliver ambitious targets, it is absolutely pivotal that in Paris 2015 parties will sign a credible agreement for the short term. The theory is that if the parties managed to converge towards the Cournot agreement at the COP21, they will, eventually, move closer to a cooperative outcome in the longer term. In substantiating his argument, Dr. Buckle underlined the difficulties of reaching a cooperative outcome based on a global carbon budget. Moreover, he explained that the failures of previous negotiations stemmed from a too-ambitious commitment to move beyond “Business as Usual” that has so far fallen short of delivering the target of keeping global warming below the threshold of 2°C increase.

The Cournot outcome based on convergence, by contrast, would contain realistic targets decided by all the parties and not by few major emitters. Furthermore, the outcome will encourage not only cooperation but also R&D and innovation, which will benefit above all the most vulnerable countries. In concrete, Dr. Buckle argued that the best negotiating option would allow a global CO2 emissions peak by 2030 and a global but differentiated commitment to reduction, according to which developed countries would need to substantially reduce their emissions and at the same time promote financial and technological innovation; middle income countries would focus on reducing emissions intensity/GDP; and least developed countries would need to commit to a more modest reduction in the short term and develop a long-term low-carbon development path, avoiding the risk of carbon lock-in.

The future of climate negotiations?


To conclude, it is mandatory that at the COP 21 the international community starts to engage proactively and positively in order to tackle climate change. Dr. Buckle’s view is that a gradual convergence and gradual move towards cooperative and environmentally effective agreements is preferable rather than facing another failure that we cannot afford.

Dr. Buckle’s conclusions will surely contribute to the debate on how we should achieve a substantial reduction of carbon emissions. From an environmentalist perspective, advocating for a gradual negotiating strategy that is “not enough” could be problematic. The last geopolitical turmoil, however, and particularly the worsening of the crisis in Ukraine, should make us aware that we cannot take the willingness to commit and cooperate of the international community for granted. Therefore, although the proposed solution might be far from optimal, it may just be strategically the most credible one.