By Cabot Institute for the Environment August 08, 2018

For the past month, Europe has experienced a significant heatwave, with both high temperatures and low levels of rainfall, especially in the North. Over this period, we’ve seen a rise in heat-related deaths in major cities, wildfires in Greece, Spain and Portugal, and a distinct ‘browning’ of the European landscape visible from space.

Leo Hickman, Ed Hawkins, and others, have spurred a great deal of social media interest with posts highlighting how climate events that are currently considered ‘extreme’, will at some point be called ‘typical’ as the climate evolves.

As part of a two-year project on how future climate impacts different sectors (www.happimip.org), my colleagues and I have been developing complex computer simulations to explore our current climate as well as possible future climates. Specifically, we’re comparing what the world will look like if we meet the targets set out in the Paris agreement: to limit the global average temperature rise to a maximum of 2.0 degrees warming above pre-industrial levels but with the ambition of limiting warming to 1.5 degrees.

The world is already around 1 degree warmer on average than pre-industrial levels, and the evidence to date shows that every 0.5 degree of additional warming will make a significant difference to the weather we experience in the future.

So, we’ve been able to take those simulations and ask the question: What’s the probability of us experiencing European temperatures like July 2018 again if:


What we’ve found is that European heat of at least the temperatures we have experienced this July are likely to re-occur about once every 5-6 years, on average, in our current climate. While this seems often, remember we have already experienced 1C of global increase in temperature. We’ve also considered the temperature over the whole of Europe, not just focusing on the more extreme parts of the heatwave. If we considered only the hottest regions, this would push our current temperature re-occurrence times closer to 10-20 years. However, using this Europe-wide definition of the current heat event, we find that in the 1.5C future world, temperatures at least this high would occur every other year, and in a 2C world, four out of five summers would likely have heat events that are at least as hot as our current one. Worryingly, our current greenhouse gas emission trajectory is leading us closer to 3C, so urgent and coordinated action is still needed from our politicians around the world. 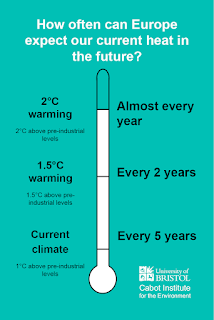 Our climate models are not perfect, and they cannot capture all aspects of the current heatwave, especially concerning the large-scale weather pattern that ‘blocked’ the cooler air from ending our current heatwave. These deficiencies increase the uncertainty in our future projections, but we still trust the ball-park figures.

Whilst these results are not peer-reviewed, and should be considered as preliminary findings, it is clear that the current increased heat experienced over Europe has a significant impact on society, and that there will be even more significant impacts if we were to begin experiencing these conditions as much as our analysis suggests.

Cutting our emissions now will save us a hell of a headache later.


-----------------------------
This blog is written by Dr Dann Mitchell (@ClimateDann) and Peter Uhe from the University of Bristol Geographical Sciences department and the Cabot Institute for the Environment.