By Cabot Institute for the Environment June 14, 2022 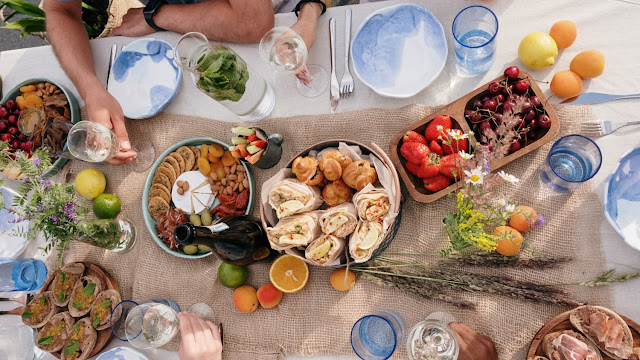 Have you ever wondered how the food you eat impacts climate change? There are all sorts of discussions around energy, transport, green tech, that famous 1.5 ℃, the IPCC... but there is a significantly unspoken polluter that is part of our daily lives, and without which, ironically, we could not live: the food industry. The food industry is one of the biggest contributors to climate change and biodiversity loss, yet food systems have not been given much thought until recently, somehow it was always thought that food “just happens”.

How many of us, when shopping at the supermarket, really think about where everything that is there, nicely placed on the shelves and aisles, comes from? Who packaged your apples? Who flew your avocados from Brazil? Who harvested those avocados from Brazil and how much were they paid? How old was that cow that some factory milked, and who bottled the milk? What is the footprint of that bottle? How much space do cows take? How much soya do they need to grow? How much do cows emit? We could go on forever, but the reality is that not many people really ask those questions at the supermarket, for some, as I said, food happens.

And I feel obliged here to open a short bracket to say that, of course, in reality there will be people who are not even able to ask those questions because it is not their priority. There are often bigger problems in our lives we have to deal with, and it would be unreasonable to ask people who, for example, are struggling to make ends meet to think about what they buy. But on the other hand that is also the point. We have made it incredibly difficult and almost a privilege for people to be able to reflect on their food. So returning to my initial point, how could we blame anyone for not asking all those questions, when we have become so detached from those very people who produce our food, and those places where food is grown?

With food systems becoming ever more complex and globalised, individuals started to lose touch with the reality behind the curtains. We no longer ask the farmer; we ask the label, but how much can a label tell us about what we are buying? Unfortunately, big corporations can often hide behind labels, something that we now call “green-washing”, a fancy word for misleading (and often false) advertising that creates nothing but confusion among consumers, making them believe that they are making a conscious and environmentally friendly choice, when they are not.

One of the biggest controversies in the past few years was around the MSC (Marine Stewardship Council) “Certified Sustainable Seafood” label (that blue tick on tuna cans and other fish sold in supermarkets), which was criticised for setting a very low bar for fisheries to be certified as sustainable, and for its lack of on-site controls and checks. So not only the label allegedly does not guarantee that all efforts have been made to avoid bycatch and seabed damage, but also the fact that fisheries buy the certification from the MSC is for many something that undermines its credibility.

So how can consumers navigate all this information? It would be impossible for people to be able to assess the credibility of every label, stamp, tick on their food, but also unreasonable. The lack of transparency in the food system we are locked-in is a massive flaw, and labels, the way they are handed out now, are not a solution.

There has been much talk about reconnecting with our producers through smaller supply chains, and the idea of buying from their local farmers is something that many probably dream of. How nice would it be to just go to the local market, like the good old days, and buy fresh fruit, vegetables, fresh meat, fresh eggs... all sorts of delicious, good food? It would be great, yes, but probably a utopia for a long time still. Just think of Bristol, a great city with plenty of good food and farmers, a city that has been recognised for its efforts towards a better food system, yet in 2021 about 6.5% of the local population suffered from hunger and 12% struggled to access food. How is this happening in a city so rich of diverse cuisines?

There are many factors that contribute to the rise of food insecurity in Bristol. Covid-19 and the rise in cost of living are maybe the most obvious and recent factors, but generally any inequality can be linked back to poverty and lack of accessibility (which shockingly is a big problem in Bristol). But aside from all of these, something that has an impact on food systems (much more than what many would think) is culture. Systems are ultimately the result of our own ways of doing, ingrained in practice and often locked in, and our ways of doing are inevitably linked to our culture. Now I will not spend time telling you about the history of our food systems and British food culture, because, as a matter of fact, my point is somewhere else. However, in the past few years we have seen the so-called “foodie culture” emerge.

Being a foodie in the simplest terms means that you care about food and are interested about what you eat and where it comes from, which, don’t get me wrong, it is great! Because these people are probably asking those questions that I mentioned at the beginning. However, the problem is that foodie culture has become a very much elitist trend, and with food becoming more and more trendy and catered for foodies, it has now become acceptable to charge stratospheric prices for a burger and chips because the potatoes are organic. Satire aside, it is true, the quality of products should be valued more, and of course products that are produced more sustainably cost more; but this also means that we are telling people who cannot afford to spend more than a certain amount on a good burger with chips that they cannot eat good food.

The fundamental issue of foodie culture is that it has become a trend to eat “fancy” food, which gives businesses the power to price things up, in a way that it becomes exclusionary for people who do not have the privilege of being able to “treat themselves”, and this creates more division. Unfortunately, foodie culture goes hand in hand with a very much criticised characteristic of environmentalism and sustainable living, which is that it is predominantly a (white) middle-class prerogative. Being able to afford to think about sustainability is a privilege, and of course those who are in such fortunate position have the responsibility to act upon it, but what we should not forget is that indeed we are in a position that many could only envy.

There is no way we can create a better and more transparent food system, where people are connected and aware, if all these inequalities still exist. We cannot have a better food system when we live in a cultural setting that leaves half of the population behind, which is perhaps the main message I want to convey. If you have read this far, I hope you will give more thought to what your standpoint and your privileges are. I do wish I had the answers to all these problems I laid out, but there is only so much one can do in a one-year research programme!

This blog is written by Cabot Institute for the Environment member Sonia Pighini, currently researching people-centred sustainable food system transitions on the Cabot Institute's Master's by Research in Global Environmental Challenges at the University of Bristol.