By Cabot Institute for the Environment July 29, 2013
Energy policy circles have been abuzz for months over proposed changes to the way renewable energy is to be supported, and the government’s overall plan to balance the supply and demand for energy in the years to come. The Department of Energy and Climate Change have recently released details of the draft ‘strike prices’ for the Contracts for Difference(CfD) scheme, marking an important step towards a radical change in the way renewable energy producers are aided by the government.

As a mathematician working in the field of energy policy, I’m keenly aware of the sheer number of complicated schemes, financial instruments and legislative hurdles electricity producers have to face. At the same time, the health of the UK’s energy generation and distribution system is vital to every member of the population, not just the select few who understand the intricacies of these new energy policy schemes.

I strongly believe that an intuitive understanding of how energy subsidy really works must be spread beyond the corridors of Westminster and Whitehall. A wider debate will result in more informed decisions from policymakers, who currently lack a strong mandate for helpful policies and accountability for poor ones.

In this blog post, I’m going to try to explain one half of the Electricity Market Reform bill, namely the Feed-in Tariff with Contracts for Difference (FiT with CfD) scheme. I’ll do this through diagrams and a maths-free description of the way the scheme works, and the consequences for customers like you and me.

Unfortunately, I can’t avoid making enormous oversimplifications, but it should provide a basic sketch, accessible to sustainability enthusiasts from all backgrounds.

Before we look at how the Feed-in Tariff with Contracts for Difference (FiT with CfD) scheme works, let’s think about what would happen without it (or some other equivalent subsidy scheme).

Renewable energy producers are for the most part private-sector, for-profit organisations. They need a financial incentive in order to invest in our energy sector; at the very least, they need to avoid making a loss in order to remain operating. I’ve drawn a very simple figure to represent the profits and losses they can expect to make over the next couple of decades. 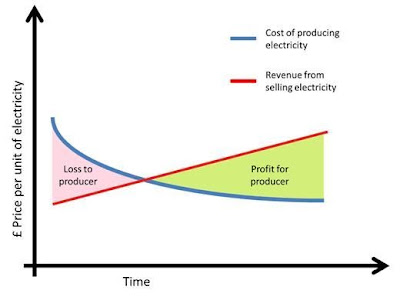 The horizontal axis in the figure represents time; we begin on the left-hand side of the diagram, and time continues as you travel to the right, with the right hand side being around 20 years from now. At the moment, the cost of producing most types of renewable energy (the blue line) exceeds the price electricity producers would get for selling it on the open market (red line).  The red shaded area represents a financial loss for the producer of the electricity, whereas the green shaded area is the profit they can expect.
As time goes on, current projections are for the cost of production to fall, and electricity prices to rise. At some point, the cost of producing renewable energy and the money producers get for selling it will be equal. This is the so-called break-even point, and is where the red and blue lines meet.
The point of break-even is extremely important to policy makers. So long as electricity producers think they are going to make a loss, they have no financial incentive to expand the UK’s renewable energy generation capacity. Once the break-even point is passed the industry should grow, as potential investors see that the industry is profitable. In order to meet the steep legislative carbon-reduction targets of the UK, the government will want to reach this break-even point as quickly as possible, as it promises a growing renewable energy sector for the years to come.
So how do we get to the break-even point more quickly? Well, that’s a question of how much money we’re willing to spend, and the mechanism through which we support renewable electricity producers.

A contract for difference, or CfD, is a financial instrument that’s been around for many years. Until recently, CfDs were predominantly used in commodities and stock trading. However, the last few years have seen CfDs adopted as an instrument of energy policy, used by major renewable energy producing nations like the Netherlands and Denmark http://www.publications.parliament.uk/pa/cm201012/cmselect/cmenergy/742/74208.htm. The UK will soon be adopting a form of CfD scheme too, known officially as the Feed-in Tariff with Contracts for Difference (FiT with CfD) scheme. Let’s take a look at how it works. 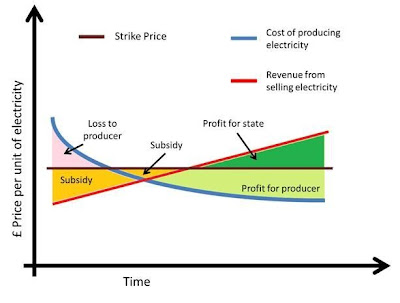 In the FiT with CfD scheme, the government enters into contracts with electricity producers in an individual, case-by-case basis. They agree a ‘strike price’, at which electricity generated by the producer is to be valued for the duration of the contract. When revenues from selling electricity at market prices (red line) are below the strike price (brown line), the producer can ask the government to make up the difference (orange shaded area). This effectively takes the place of subsidy in more orthodox schemes, and brings forward the break-even point to where the blue line meets the brown line, making the industry profitable sooner and attracting new investors.

What does this actually mean to you and me, the consumers of electricity? Well, whatever the government spends on supporting renewable energy will be added on to our tax bills, regardless of how much electricity we might individually use. On the other hand, we will reach our carbon-reduction targets quicker. It’s possible to balance the pros and cons of the scheme by changing the strike price, but it’s not an easy problem given the politics surrounding renewable energy.

As I’ve hinted before, things are much more complicated than the explanation I’ve given here, and while I’ve tried to describe the scheme as it is intended to work, we can’t be sure that it will behave as expected; we haven’t reached the break-even point yet, so there’s little evidence to go on!

What’s next for the Electricity Market Reform (EMR) bill? Well, it’s currently under review by the House of Lords and is expected to be given Royal Assent before 2014. EMR, for good or for ill, is coming soon.

This blog is written by Neeraj Oak, from the department of Complexity Sciences at the University of Bristol.