Do not make policy during the middle of a flood crisis

By Cabot Institute for the Environment March 14, 2014 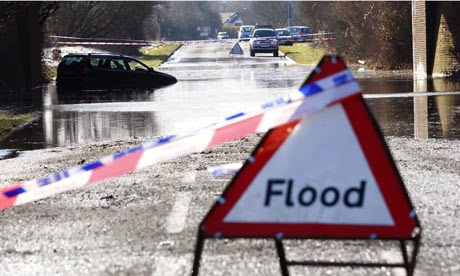 What they have been given is political gamesmanship.  Blame shifting from party to party, minister to minister, late responses, dramatic reversals of opinion.  It reached its well-publicised nadir this past weekend, with Eric Pickles’ appearance on the Andrew Marr show:


‘I apologise unreservedly and I'm really sorry that we took the advice; we thought we were dealing with experts.’

Throwing your own government experts to the wolves is not an apology.

This political vitriol, at least with respect to the Somerset Levels, all appears to come down to a relatively simple question – should we have been dredging?

This is not a simple question.

It is an incredibly complex question, in the Somerset Levels and elsewhere, and this simplistic discussion does the people of those communities a great disservice.

But more fundamentally, this is not the time to be deciding long-term flood mitigation strategy.  In times of disaster, you do disaster management.  Later, you learn the lessons from that disaster.  And finally, informed by evidence and motivated by what has happened, you set policy.  And that, to me, is the most frustrating aspect of the current political debate.  In an effort to out-manoeuvre one another, our leaders are making promises to enact policy for which the benefits appear dubious.

So, what are some of the issues, both for Somerset and in general?

First, the reason the rivers are flooding is primarily the exceptional rainfall – January was the wettest winter month in almost 250 years. This rain occurred after a fairly damp period, so that the soil moisture content was already high. However, these issues are exacerbated by how we have changed our floodplains, with both agricultural and urban development reducing water storage capacity.

Second, as the 2013-2014 flooding crisis has illustrated, much of our nation is flood-prone; however, those floods come in a variety of forms and have a range of exacerbating causes – some have been due to coastal storm surges, some due to flash floods caused by rapid flow from poorly managed lands and some due to sustained rain and soil saturation. We have a wet and volatile climate, 11,073 miles of coastline and little geographical room to manoeuvre on our small island.  Our solutions have to consider all of these issues, and they must recognise that any change in a river catchment will affect our neighbours downstream.

Third, returning to the specific challenge of the Somerset Levels, it is unclear what benefit dredging will have. The Somerset Levels sit near sea level, such that the river to sea gradient is very shallow.  Thus, rivers will only drain during low tide even if they are dredged.  And widening the channels will actually allow more of the tide to enter. Some have argued that in the past, dredging was more common and flooding apparently less so.  However, this winter has seen far more rain and our land is being used in very different ways: the memories of three decades ago are not entirely relevant.

Fourth, where dredging is done, it is being made more costly and challenging by land use practices elsewhere in the catchment. The rivers are filling with sediment that has eroded from intensively farmed land in the headwaters of the catchments and from the levels themselves. Practices that have greatly accelerated erosion include: heavy machinery operations in wet fields; placement of gates at the bottom of hillslopes so that sediment eroded from the field is very efficiently transported to impermeable road surfaces, and thence to streams downslope; cultivation of arable crops on overly steep slopes (increasing the efficiency of sediment transport from land to stream); overwintering of livestock on steep slopes; and excessive stocking densities on land vulnerable to erosion.

Nutrient enrichment from livestock waste and artificial fertilisers (when used in excess of crop requirements) also contribute to the dredging problem.  The nutrient loading often exceeds the system’s recycling capacity, such that nutrients flow into ditches and waterways, stimulating growth of aquatic plants that can readily clog up the minor ditches and waterways. With less space to dissipate water within the network, it is forced into the main channel.  In other words, some of these floods are a subsidised cost of agriculture – and by extension the low costs we demand of our UK-produced food.

And finally, if we are going to consider long-term planning, we must consider climate change impacts. Flooding will become worse due to sea level rise, which has already risen by about 12cm in the last 100 years, with a further 11-16cm of sea level rise projected by 2030.   It is less clear how climate change will affect the intensity and frequency of these particularly intense rainfall events. Although almost all projections indicate that dry areas will become dryer and wet areas will become wetter, predictions for specific geographical regions are highly uncertain.  And our historical records are not long enough to unravel long-term trends in the frequency of uncommon but high impact weather events. This should not be reassuring – it is another major element of uncertainty in an already complex problem.

As challenging as these issues are, they are not intractable. The solutions will involve stronger planning control and scientifically informed planning decisions (including allowing some areas to flood), a reconsideration of some intensive farming practices, some dredging in key areas, some controlled flooding in others, and better disaster management strategy for when the inevitable flooding does occur.  But now is not the time to resolve such a complicated knot of complex issues.  It is certainly not the time to offer false promises or miracle cures.

Now is the time to help our neighbours in distress, listen to their stories, and remember them when the floodwaters recede.  And then we should let our experts get on with their jobs.
---
This blog is co-written by Professor Paul Bates, Professor Penny Johnes (Geographical Sciences), Professor Rich Pancost (Chemistry) and Professor Thorsten Wagener (Engineering), all of whom are senior members of the Cabot Institute at the University of Bristol.

This blog post was first published in the Guardian on 12/02/2014, titled Flood crisis: Dredging is a simplistic response to a complex problem.

If you have any media queries relating to this blog, please contact Paul Bates or Rich Pancost (contact details in links above).