Tradable Energy Quotas: The future of energy use?

By Cabot Institute for the Environment July 21, 2014
The idea of Tradable Energy Quotas or TEQs has been floating around political circles since it was proposed by Dr. David Fleming in 1996. It’s been called the most influential scheme of its type, and has attracted cautious interest from both Labour and the Conservatives within the UK, as well as from EU bodies concerned with climate change.

TEQs are, in effect, a rationing scheme designed to curb the use of carbon-intensive energy sources. Each TEQ certificate would be a licence to emit a certain quantity of CO2, and would have to be surrendered by energy generators to the TEQ registrar at the end of each year. The TEQ certificates would begin in the hands of the end consumers of energy, and would travel up the production chain as TEQs would be used alongside cash as a parallel payment system for energy.

At the heart of the TEQ system is the idea that a country should be held to an annual ‘carbon budget’, and that each adult citizen should be entitled to an equal proportion of the domestic part of that budget. Businesses and industry would have to purchase rights to the remainder of that budget in order to power offices and machinery. TEQs would replace the more traditional method of emissions limitation, the carbon tax. The schematic below was reproduced from a report on TEQs by the All Party Parliamentary Group on Peak Oil. 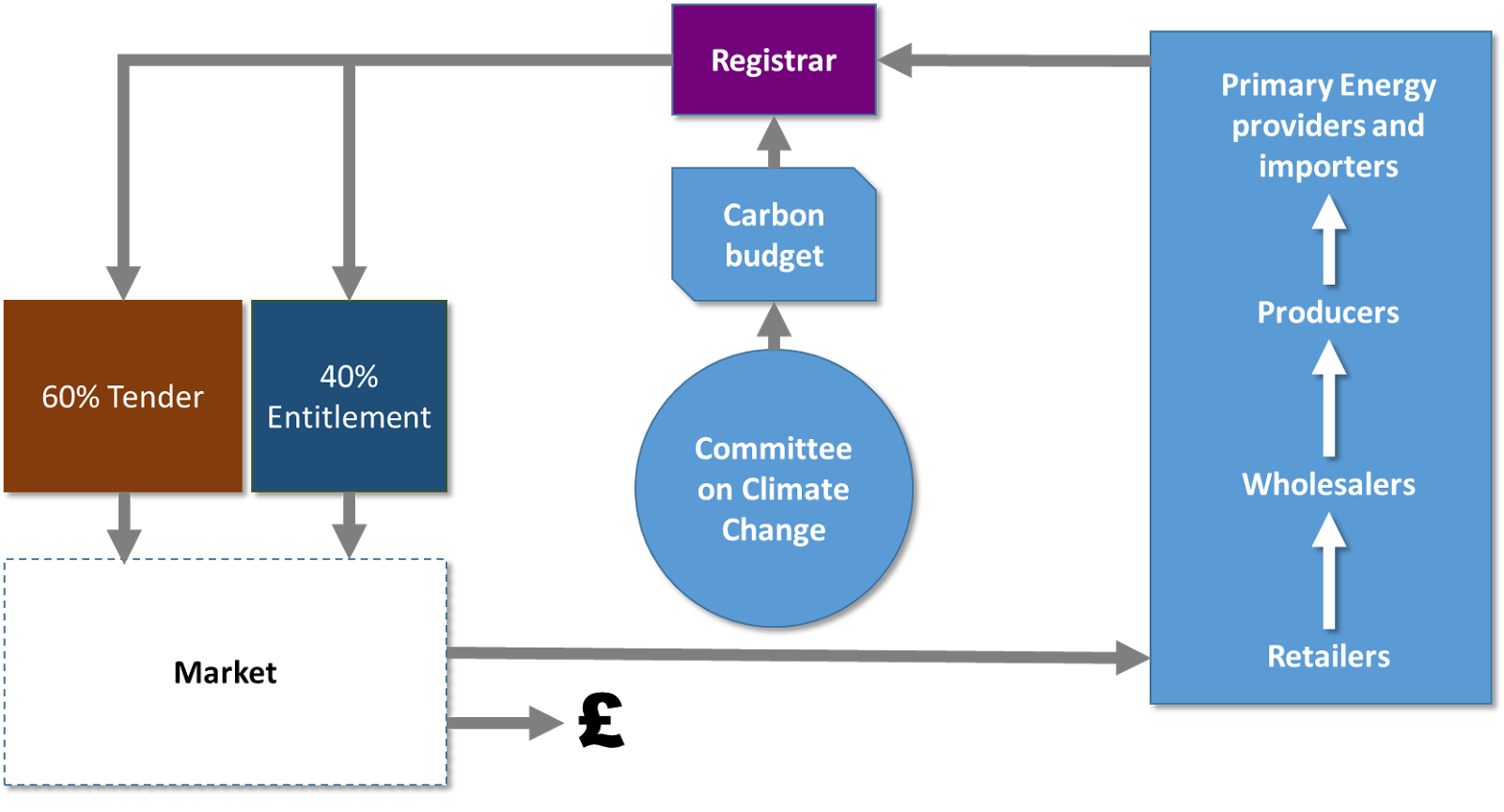 In the TEQ scheme, 40% of the annual carbon budget would be distributed free to citizens, perhaps through an online account. The remaining 60% would be available to purchase from the TEQ registrar, and is mainly aimed at businesses. However, domestic users who exceed their free allowance of TEQs can also ‘top up’ by purchasing TEQs from this pool.

People who don’t use their full allowance of TEQs could sell their surplus on a market that is overseen by the registrar. This encourages domestic energy users to be frugal in their energy use in order to profit from the sale of TEQs. Businesses too would need to curb their energy use in order to avoid having to buy too many TEQs. Finally, the generators and importers of energy would have to gather all the TEQ certificates gained from sale of energy and return them to the registrar at the end of each year. If they are unable to provide enough TEQ certificates to cover the energy they have produced, they would face financial penalties.

The TEQ scheme is designed to produce a profit for the government through the sale of 60% of the TEQ certificates. This income would replace that of a more traditional carbon tax, and could hopefully be ploughed back into creating more low-carbon energy.

Now I’m going to put my cards on the table. I like this scheme. My instinct tells me that TEQs, or rationing of some form, is a sensible response to the problem of climate change. But as it stands, I don’t think this scheme would work.

Let’s start with the most pressing problem: Who is the registrar? In the proposed TEQ system, an astonishing amount of power and control is given to the ‘registrar’, without any firm idea of who or what the registrar is.

Perhaps it’s a public-sector organisation? With 60% of the TEQs initially allocated to the registrar for tender, the power it has over the price of each TEQ is practically insurmountable, allowing them to increase or decrease prices almost at will. With this kind of control, they will come under intense pressure from the treasury to raise TEQ prices to generate more revenue. At the same time they would be lambasted by the populace, who would demand an ever lower TEQ price. To offer control over the registrar to a government department would be akin to offering someone a grenade without the pin- it’s political suicide. To put it mildly, I suspect the creators of the TEQ scheme would have trouble finding someone to do the job.

So how about letting a private sector company have control of the registrar? Well, I’m certain you would have companies lining up for the job, but trusting any of them would be a fatal mistake. With such a remarkable monopolistic power, a private sector company would inevitably succumb to the temptation to appropriate a larger and larger proportion of the revenues. It wouldn’t be anything illegal of course, merely a creeping expansion in administration costs and a slow rise in wages- especially of the top executives. And how long would it be before the first accusations of insider trading surface? It wouldn’t be hard for a company in charge of the registrar to conceal its preference for certain other firms, offering them cheaper or earlier deals on TEQs. Handing control of the energy industry to a private firm also has energy security implications; how can we be certain that the company will work in the best interests of our country? In the worst case, it might even be persuaded to work in the interests of a foreign power. The final problem with private-sector control is transparency. Once the government loses control of the registrar, it will lose sight of the intricacies of running the TEQ scheme. At this point, it becomes very difficult to verify if the registrar is doing a good job, and even harder to justify reprimanding them.

Centralising power over the market and allocation of TEQs also has one other major problem. What happens if the registrar’s servers crash? It would paralyse the country’s energy network, ensuring nobody could buy or sell energy. We wouldn’t have to worry about energy security anymore; we could have all the fuel in the world stacked in warehouses around the UK, but if the TEQ exchange goes down it would all be effectively useless. My conclusion: having a single TEQ market overseen by a single registrar would make us incredibly vulnerable to hackers or hostile governments.
So is there a remedy for all these problems? I think there is.

First, split the job of regulating TEQ markets away from the task of allocating and collecting TEQs. There is no strong reason why both jobs have to be done by the same organisation, and it’s far safer for it to be done by two separate ones. Second, open up the job of administering TEQ markets to private sector brokers, but make them liable for the exchanges they handle. This means that hackers would have to target several exchanges to bring down the country’s energy network, rather than just the one.

Finally, eliminate the job of administering the TEQ accounts of every citizen completely. Users could store their TEQs in digital wallets that reside on their own computers and mobile devices, and the value of their TEQs could be cryptographically protected using something akin to a blockchain.

Decentralisation might not solve every problem that TEQs currently pose, but it could go a long way towards making it a more secure and accountable system. Will TEQs be introduced anytime soon? I doubt it, but it’s possible that a smaller scheme may be trialled somewhere in the world over the next few years, as governments struggle with the problem of emissions reduction.

This blog is written by Cabot Institute member Neeraj Oak, the Chief Analyst and Energy Practice Lead at Shift Thought.