Interests in Aid and Development: a talk with Myles Wickstead

Among Wickstead’s notable achievements are a position as head of British Development Division in Eastern Africa, coordinating a British Government White Paper on eliminating world poverty and now being an advisor to the charity Hand in Hand International.

An audio recording of Myles lecture can be found above. His talk focussed largely on the inception of the building blocks of international development; the UN, the World Bank and the International Monetary fund. He began by turning back time towards the end of the second World War, in which the atmosphere of global reconciliation bred the need for trans-border institutions such as the UN that had the oversight necessary for peace to prevail. 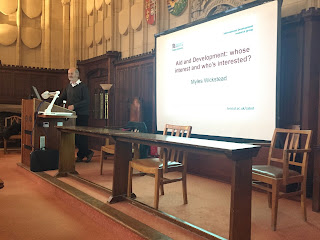 Many years later, the UN decided to introduce development goals with the aim of reducing global poverty within a given time frame. The first of these was the Millennium Development Goals which were drafted in the UN head quarters with little external solicitation. In fact, Wickstead reminisced that environmental goals were almost completely overlooked and only added when a member of the committee ran into the director of the UN environment department on the way to the copier room…

Wickstead went on to add that a large parts of the Millennium goals were generally quite successful although there was still plenty of scope to be more inclusive. He also dwelt on the new Sustainable Development Goals drafted by the UN in 2015 and the Paris climate summit which, Wickstead claims, represent a much more integrated approach to propel international development into the future.

Below is my interview with Myles in which I question him on his talk and ask him about his career in aid and development:

You mentioned a fair bit in your talk about the importance of tying in environment sustainability with aid and development. How do you see that working in practice in a developing country when sustainable practices can be sometimes be quite anti-economic?

Yes, the two things are brought together in the Global Goals for Sustainable Development agreed in New York in September 2015.  Let’s take an example of a country that’s well-endowed with forest resources. They could get rich quickly by chopping down the trees and selling the wood. You can’t expect those countries to simply say ‘we are not going to chop our forest down’. Firstly you need them to realise that for the long-term sustainability of their country they need to preserve the  forest. But second, because maintaining the forests helps protect us all from climate change they rightly expect some compensation from the international community to do so. There are (albeit imperfect) mechanisms in place for this. Despite this I do, on the whole, think they are being successfully implemented: take Brazil for example.

There are also examples where – often without the consent of the government - indigenous forests are being cut down to make way for palm oil plantations, with devastating consequences not only for the trees but the wildlife.  In these situations, governments need to be encouraged to take firm action against the individuals or  companies concerned, again with support from the international community as and if appropriate.

I work on volcanic hazard in Ethiopia and one of the things I’ve noticed is the more wealthy urban areas are developing fast with an expanding middle class, but the more rural areas are still subject to a lot of extreme poverty. What part should external aid play in helping this wealth filter down?

It’s a very important question and one I touched on when talking about the Millennium Development Goals (MDGs) which were in place from 2000-2015.  That period saw extraordinary progress, including halving the proportion of people living in absolute poverty, but many people (for example, those with disabilities or from ethnic minorities) were left out.  It is also the case that urban areas, with generally better infrastructure and more job opportunities, tended to make faster progress.  A lot of people in rural areas were in very much the same position in 2015 as in 1990. Within Ethiopia, a combination of rapid economic growth – supported both by investment and aid  – and good policies mean that the benefits are now being felt more widely.

The role of Chinese investment in infrastructure, particularly roads, has I think been quite a positive one. The Government of Ethiopia has a very clear five year growth and investment plan and they expect their partners to deliver; I remember one case of former Ethiopian Prime Minister Meles requiring a Chinese company to rebuild a road they had just built as it was not up to standard; I am sure they were equally exacting of other companies from other countries.  Not all African governments have that kind of determination but on the whole I think Chinese engagement has been a good thing.  And the fact that Africa was largely unaffected by the global recession following the crash of 2008 was not only because it was not as connected to the international financial system as other parts of the world, but also because China and other countries in Asia continued to buy its raw materials.

What influenced your decision to have a career in Aid and development?

I had lived and travelled overseas a little.  My father was a marine biologist and as a technical expert worked for the predecessors of DFID and lived and worked overseas in places like Singapore, Tanzania, and Jamaica.  So I probably got some of the wish to live and work overseas from him – though alas didn’t inherit the science gene, which passed me by!

I went through the civil service fast stream process, and having successfully negotiated that had to make a choice about which Department I wanted to join.  It was then the Ministry of Overseas Development; a few years later became the Overseas Development Administration of the FCO; and in 1997 became a fully-fledged Department of State with its own Cabinet Minister. Interestingly, DFID remains the most popular choice of all government departments for fast-steam applicants.

Is there a defining moment in your career you want to mention?

I have been extraordinarily lucky in the choices that I have made - or have been made for me - in terms of where I was at particular time. To have had the chance to run a regional office in Africa; to have been on the Board of the World Bank; to have worked closely with Ministers both as a Private Secretary and in coordinating the 1997 White Paper (the first in 24 years); and to be Ambassador to Ethiopia and the African Union – it was a huge privilege (and very hard work!) to be given these responsibilities.  I ran the Commission for Africa Secretariat in 2004/5, and I suppose one of the great moments was going to present a copy of the Commission’s Report ‘Our Common Interest’ in 2005 to Nelson Mandela.

Someone asked earlier today- how do you keep positive despite the gloomy state of much of the world? My answer would be that the world has made extraordinary progress over the past quarter of a century in pulling people out of poverty, and that we have a real chance of completing the task, in line with the Sustainable Development Goals, by 2030. Of course there have been setbacks along the way, and there will be more – conflict and environmental challenges to name but two. But with political will, and by maintaining a positive focus, I believe we can aspire to a better world both for ourselves and for future generations. 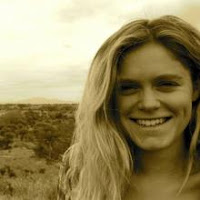