How banks are trying to capture the green transition

By Cabot Institute for the Environment October 08, 2020

Private sector banks in the UK should have a central role in financing climate action and supporting a just transition to a low carbon economy. That’s according to a new report from the Grantham Research Institute at the London School of Economics.

Framed as a strategic opportunity that climate change represents for investors, the report identifies four specific reasons why banks should support the just transition. It would reinforce trust after the financial crisis; it would demonstrate leadership; it would reduce their exposure to material climate risks; and it would expand their customer base by creating demand for new services and products.

The report is not alone in its attempt to put banking and finance at the centre of a green and just transition. Similar arguments are presented by the World Bank, by the European Union, and by many national task forces on financing the transition, including the UK’s.

In all these cases, banks and financial markets are presented as essential allies in the green and just transition. At the same time, the climate emergency is described as a chance that finance cannot miss. Not because of the legal duties that arise from international conventions and the national framework, but because banking the green transition could help reestablish public legitimacy, innovate and guarantee future cashflow.

Twelve years after the financial crisis, we may be aware that banks and finance were responsible for the intensification of climate change and the exacerbation of inequality, but such reports say our future is still inexorably in their hands.

Is there no alternative to climate finance?

Four decades on from British prime minister Margaret Thatcher’s infamous motto that There Is No Alternative to the rule of the market, the relationship between financial capital and the green and just transition is presented as universal and inevitable. However, a vision of the future is a political construction whose strength and content depend on who is shaping it, the depth of their networks and their capacity transform a vision into reality. 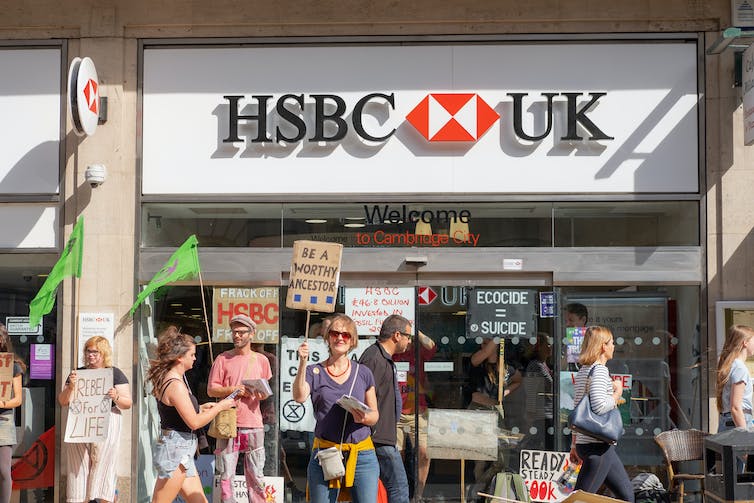 In the case of climate finance, it seems that a very limited number of people and institutions have been strategically occupying key spaces in the public debate and contributed to the reproduction of this monotone vision. In our ongoing research we are mapping various groups involved in green financial policymaking: the EU’s High-Level Expert Group on Sustainable Finance and its Technical Expert Group on Sustainable Finance, the UK Green Finance Task Force, the participants to the 2018 and 2019 Green Finance Summits in London and the authors behind publications like the LSE’s Banking on a Just Transition report.

Across these networks, key positions are occupied by current and former private industry leaders. Having done well out of the status quo, their trajectories and profiles denote a clear orientation in favour of deregulation and a strong private sector.

Often, the same people and organisations operate across networks and influence both regional and national conversations. Others are hubs that occupy a pivotal role in the construction of the network and in the predisposition of the spaces and guidelines for dialogue and policy making. This is the case, for example, of the Climate Bond Initiative (CBI), a relatively young international NGO headquartered in London whose sole mission is to “mobilise the largest capital market of all, the [US]$100 trillion bond market, for climate change solutions”. Characterised by a strong pro-private finance attitude, CBI proposes policy actions that are infused by the inevitability of aligning the interests of the finance industry with those of the planet.

COVID-19 has emphasised the socio-economic fragility of global financial capitalism and represents the shock that may lead to an acceleration of political processes. While corporate giants are declaring bankruptcy and millions are losing their jobs, governments in Europe and across the global north continue to pump trillions into rescuing and relaunching the economy in the name of the green recovery.

Political debate and positioning will decide whether these public funds will be spent on bailouts or public investments, on tax breaks for the 1% or provision of essential services, or whether the focus will be on green growth or climate justice. But private finance is already capturing this debate and may become a key beneficiary. Getting a green and just transition does not only depend on the voices that are heard, but also those that are silenced.

Intellectual and political elites on the side of the banks are making it harder to have a serious discussion about addressing climate change. NGOs and campaign groups are participating, but only if they share the premises and objectives of the financial sector.

This crowds out more transformative voices from civil society and the academy, and establishes a false public narrative of agreed actions despite the numerous voices outside of this club. And it also normalises the priority of financial market activities, putting profit before people and planet.

This blog is written by Cabot Institute members Tomaso Ferrando, Research Professor, University of Antwerp and Dr Daniel Tischer, Lecturer in Management, University of Bristol. This article is republished from The Conversation under a Creative Commons license. Read the original article.