Power within the rift

By Cabot Institute for the Environment September 23, 2013
Lying just under the Earth’s surface, the East African Rift is a region rich in geothermal resources. Exploitation of this clean and green energy source is steadily been gaining momentum. What is the geological mix that makes the Rift Valley ripe for geothermal power and how is it being tapped?

The East African Rift, stretching from Djibouti to Mozambique, marks the trace of a continent slowly tearing apart. At rates of about 1-2 cm per year, the African continent will one day split into two separated by a new ocean.

When continental rifting occurs, volcanism shortly follows. As the continent steadily stretches apart, the Earth’s crust thins allowing an easier path for buoyant magma to rise up. Where the magma cracks the surface, volcanoes build up. Dotting the Rift Valley are many active, dormant and extinct volcanoes. Famously active ones include Nyiragongo in the Democratic Republic of Congo, Ol Doinyo Lengai in Tanzania and the bubbling lava lake at Erta Ale volcano in Ethiopia.

How to brew a geothermal system 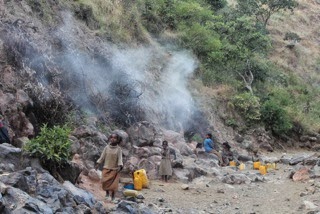 The presence of volcanoes in the Rift Valley indicates one important occurrence –hot rocks under the Earth’s surface. This, combined with a thinned crust due to extension, provides the first geological ingredients for a geothermal system. Active magma chambers are typically extremely warm; consequently they will heat up groundwater in fractures and pores in the surrounding rock up to temperatures of 200-300°C.

Hence, a geothermal field can be defined as a large volume of underground hot water and steam in porous and fractured hot rock. A geothermal system refers to all parts of the hydrological system involved, including the water recharge and the outflow zone of the system. The area of the geothermal field that can be exploited is known as the geothermal reservoir and the hot water typically occupies only 2 to 5% of the rock volume. Nevertheless, if the reservoir is large and hot enough, it can be a source of plentiful energy.

To keep a geothermal system brewing you need three essential components: a subsurface heat source; fluid to transport the heat; and faults, fractures or permeability within sub-surface rocks that allow the heated fluid to flow from the heat source to the surface or near surface.
East African Resources

The presence of geothermal systems in East Africa has not gone unnoticed. At present, geothermal electricity is produced in Kenya and Ethiopia with Djibouti, Eritrea, Rwanda, Zambia, Tanzania and Uganda at the preliminary exploration and test drilling stages. Kenya is steams ahead in terms of development with an installed capacity of 200 MW, but still progress has been slow over the last few decades. In comparison, Ethiopia currently has a 7.3 MW installed capacity with a proposed expansion of 70 MW. 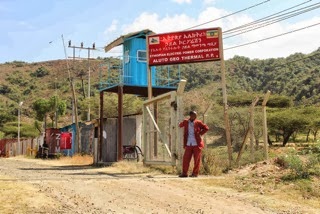 In Hells Gate National Park, just south of Lake Naivasha, Kenya’s geothermal energy is generated from Olkaria power station. Exploration at Olkaria started in 1955 but it wasn’t until the 1960s when 27 test wells were drilled that extensive exploration kicked off. At present, Olkaria I power station generates 45 MW, Olkaria II produces 65 MW and Olkaria III is a private plant generating 48 MW.  Olkaria IV power plant is under construction, due to be completed in 2014 and has an estimated potential of between 280 and 350 MW. By 2030, Kenya hopes to produce at least 5,000 MW of geothermal power.

Whilst the East African Rift naturally provides the perfect geological conditions in order to meet future energy demands, the risks involved have so far prevented significant development. Geothermal exploration and development is a high-risk investment. Financially, investing in geothermal has high up-front costs followed by relatively low running-costs. If drilling encounters a dry well during exploration, then the financial loses can be substantial, at roughly $3 million of investment for each MW produced, dry wells can cause significant financial set backs, consequently detracting investors.

It’s not just financial risks, there’s geological risk too - they are volcanoes after all. In Kenya, geothermal fields comfortably sit on top of the volcanoes Olkaria, Longonot, Eburru, Paka and Menengai. The picture is similar in Ethiopia where the Alutu Langano power plant is situated within Alutu volcano. In fact, nearly every geothermal prospect site throughout East Africa is located near, or on a volcano.

Whilst many of the volcanoes have not erupted in historical times, recent satellite observations using a technique called InSAR, has revealed that these volcanoes may not be as quiescent as previously thought. Menengai, Alutu, Corbetti and Longonot have all shown periods of ground deformation, both uplift and subsidence. The precise cause of these ground movements is subject to further research with possibilities including the rise or withdrawal magma within the crust or perturbations to the geothermal system. What these observations do mean however is that perhaps accounting for geological risk could be considered in future geothermal development.

This blog has been written by Elspeth Robertson, Earth Sciences, University of Bristol