Your planet needs you!

By Cabot Institute for the Environment April 14, 2014 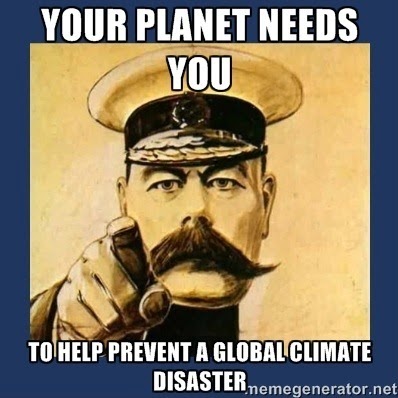 We are under attack. Our assailants threaten to kill millions of people, destroy our homes and wipe out our crops. Who are these fiends?

The latest report from the Intergovernmental Panel on Climate Change (IPCC) focusses on how we can stop runaway climate change before it’s too late.  Despite our “best efforts”, anthropogenic greenhouse gas emissions have continued to increase at an alarming rate. The IPCC estimates that without any additional effort to reduce emissions, we’re looking at a rise in temperature of between 3.7 and 4.8°C by 2100, although variability in the effects of climate change mean the rise could be as high as 7.8°C. Anything over 2°C means we risk runaway climate change with catastrophic effects felt around the world.

A call to action


“we need a worldwide, large-scale change to our energy system if we are to limit the effects of climate change”

and called for an international effort to reduce carbon emissions by 2015.

The question is, are politicians willing to put in the effort needed to reduce emissions by 40-70% in the next couple of decades? It’s hard to put a price on the cost of mitigation, but as Professor Ottmar Edenhofer, co-chair of the IPCC team, stated “Climate policy is not a free lunch”. His colleague Professor Jim Skea was more optimistic, saying that,


“it is actually affordable to do it and people are not going to have to sacrifice their aspirations about improved standards of living”.

That’s the kind of thing that politicians like to hear.

Change doesn't happen unless something dramatic happens to force us to act. The increasing frequency of extreme weather events doesn't seem to be working, so what would? As the IPCC brief states, “Emissions by any agent (e.g. Individual, community, company, country) affect other agents”. We need to invoke some Blitz mentality; we ARE facing a deadly enemy and we ALL need to do our part to stop it.

How to mitigate climate change

The IPCC used 10,000 scientific references to ensure that their models are properly founded in science and all the uncertainty that entails. The IPCC defined mitigation as “a human intervention to reduce the sources or enhance the sinks of greenhouse gases”, and look at a range of scenarios to find the most effective and efficient methods.

The report particularly favoured low carbon energy sources as a major way to reduce emissions, using natural gas as a transition fuel into renewable energies. Encouragingly, renewable energy comprised over half of all new electricity-generating developments globally, with wind, hydro- and solar power leading the way. The costs of renewable energies are falling, making them viable for large scale deployment in many areas, and Professor Skea enthused that

“Renewables are going to be ubiquitous no matter which part of the world you look at”.


Cities will play a big part in reducing CO2 emissions too; a combination of better urban planning to incorporate public transport and compact walkable city centres will be vital. The report also recommended high speed rail networks between cities to reduce short haul air travel and its associated high emissions.

Replanting forests will be an important way to remove CO2 from the atmosphere. Plants take in CO2 for use in photosynthesis, but can also be used to remove pollutants from the air and soil, as well as preventing soil erosion and providing important habitats for other plants and animals.


It is important for all nations that mitigation does not mean a halt to economic development. Dr. Youba Sokona, IPCC team co-chair, said, “The core task of climate change mitigation is decoupling greenhouse gas emissions from the growth of economics and population”. This will be the main challenge for governments around the world, but the overwhelming message from the IPCC is that mitigation is affordable, whilst doing nothing is not.


There has been an undercurrent of unease alongside the IPCC report; the sticky question of who, exactly, is going to pay for this mitigation? A few days before its release, pressure from unspecified developed nations led to the removal of a section in the IPCC report stating that developing countries should receive billions of dollars a year in aid to ensure that they grow their economies in a sustainable way.

The argument centres on whether developing nations should have the right to exploit fossil fuels to expand their economies, as developed countries were able to do. Dr. Chukwumerije Okereke, one of the lead authors of the report, said that this “is holding them down from developing”, believing that “this is reinforcing historical patterns of injustice and domination”. I would argue that with the impacts of climate change predicted to affect those in developing countries most drastically, perhaps we should adopt the mentality that we are all in this together and help each other to overcome the problem.


The take home message from the IPCC is that if we act now, we can probably prevent hitting the 2°C temperature increase that would have disastrous consequences for us all. The mitigation strategies suggested are affordable and certainly cheaper than dealing with the consequences of climate change. Will politicians and all the rest of us do our parts to drastically reduce carbon emissions? Only time will tell. A lot of hope rests on the 2015 United Nations Climate Change Conference, which is hoped to yield a global agreement on climate to avoid passing the 2°C safety threshold.

Cross your fingers and turn off your lights.