Where does all the power go?

By Cabot Institute for the Environment May 06, 2014
Ever wondered how much of your electricity bill goes on charging your laptop, or whether your TV is a bigger drain on your wallet than your kettle? I have…


A good basis to use in answering that question is the Annual ‘Energy Consumption in the UK’ report by DECC. Using their data on household electricity consumption, I’ve plotted a short history of UK electricity use by appliance. I’ve tried to aggregate similar devices together to create 6 categories: lighting, refrigeration, washing & drying, consumer electronics (TVs, consoles, device chargers), computing (desktops, laptops, monitors, printers) and cooking. It’s also important to note that this data is a total for all households in the UK, and is not taken on a per device basis. 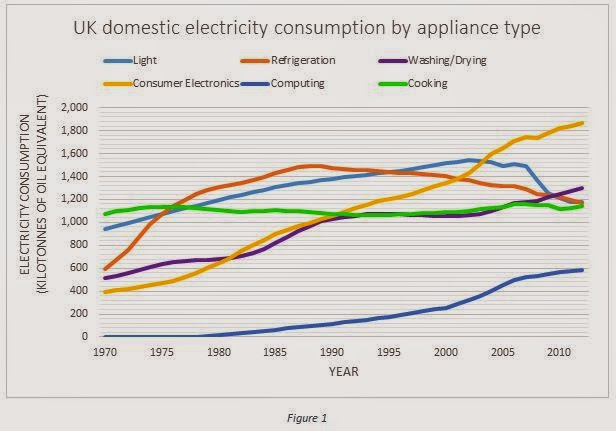 Some of this information isn’t surprising- refrigeration is notoriously expensive in physical terms, as it involves reversing a thermodynamic heat engine, in effect using energy to ‘suck’ the heat out of the colder compartment. Halogen bulbs are also commonly known as a large energy drain, due to their ubiquity and relatively low efficiency. Energy efficiency of both refrigeration and lighting have seen significant advances in the past few decades, and the relative drain on household energy of such devices reflects this.

I am, however, puzzled to see TVs on the list. The new generation of LED TVs and the advances in energy efficiency in electronics gave me the impression that these devices were far greener than their predecessors. In fact, the electricity used by TVs doubled between 1970 and 2000, and has almost tripled by 2012. I imagine this means that far more households have TVs now and that an increasing number of households own several. Even so, it is difficult to see why efficiency technology has not slowed the rate of growth of the electricity needs of televisions.

Laptops form a surprisingly small part of household electricity use, and power supply units (PSUs) and chargers appear to constitute a much larger energy drain. Perhaps the proliferation of smartphones and tablet PCs has something to do with this; the sheer number of devices that need charging may be the reason for the large increase in PSU consumption over the last few decades. 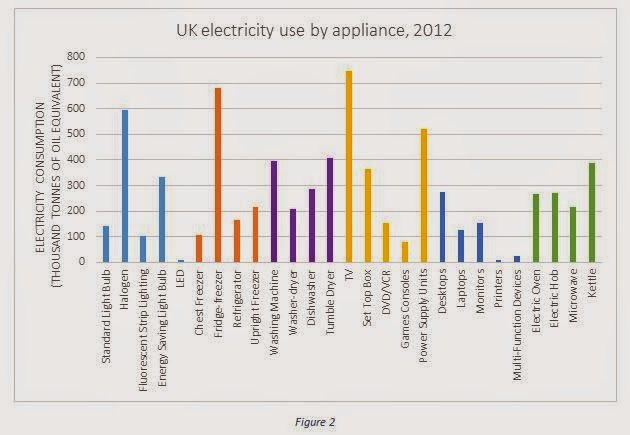 What can we take away from these statistics? On the surface, they hold few new suggestions in terms of how we should behave in order to save energy. It is common knowledge that one should boil as little water as possible in electric kettles, switch off devices and lights when they aren’t being used and purchase energy-saving devices instead of more power-hungry alternatives. However, these numbers do identify a large potential saving in energy consumption by switching to more efficient lighting methods and a significant rise in energy consumption by TVs and PSUs. The bottom line? Unplugging those idle device chargers won’t save the world from climate change, but it certainly could help.

This blog is written by Neeraj Oak, Cabot Institute.