COP21 daily report: Will we trust governments on climate?

By Cabot Institute for the Environment December 08, 2015
Cabot Institute Director Professor Rich Pancost will be attending COP21 in Paris as part of the Bristol city-wide team, including the Mayor of Bristol, representatives from Bristol City Council and the Bristol Green Capital Partnership. He and other Cabot Institute members will be writing blogs during COP21, reflecting on what is happening in Paris, especially in the Paris and Bristol co-hosted Cities and Regions Pavilion, and also on the conclusion to Bristol’s year as the European Green Capital.  Follow #UoBGreen and #COP21 for live updates from the University of Bristol.  All blogs in the series are linked to at the bottom of this blog.
----------------------------- 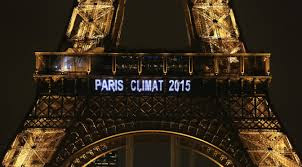 Whatever comes of the climate summit that kicked off Monday in Paris, the negotiations will be intense. Signatories of the UN’s Framework Convention on Climate Change meet every year, but this year is exceptional. The stakes are high, with governments and their negotiators seeking to finalize a landmark treaty that will guide the world’s actions for many years to come with respect to greenhouse gas emissions and the climate change they cause.

Despite the heat that the negotiations in Paris will surely generate, though, in a sense dealing with climate change could actually be… surprisingly easy. The world’s leading climate economist thinks it would cost only about 2% of GDP to get the world on track to avoid the worst effects. That’s not a lot to pay to solve perhaps the most serious challenge confronting humanity.

Why then is it proving so hard for us to buy a climate-friendly economy?

Part of the problem is that public opinion is pretty hostile to the number one thing that could get us there: making polluters pay taxes if they want to pollute.

The logic is simple. People buy less of something when it gets more expensive. Raising the price of polluting activities is therefore the most effective, direct, and time-tested way of getting people to live–produce and consume–in ways that cause less damage to the environment.
In principle, there should be no reason for people not to like the idea. Governments can lower taxes on things that do no harm (income and labour) while raising them on things that do (emitting greenhouse gases, leaching waste into groundwater, driving a car on congested streets at rush hour). Tax shifts of this kind have no net effect on public finance, and at most a very small one on household budgets–but they can make a big dent in environmental degradation.

Take the case of Canada. In 2008, a right-of-centre government in the western province of British Columbia (BC) introduced a C$30/ton tax on carbon emissions. The rest of Canada did not. Over the course of the next several years, consumption of fossil fuels in British Columbia dropped significantly, while consumption elsewhere didn't. Meanwhile, BC enjoyed faster economic growth than the average across the other provinces.

But cases like British Columbia’s are exceptional. In most places, public opinion has been too hostile to new taxes of any kind for governments to raise taxes even on pollution and the use of scarce resources. In 2013, for example, Australians voted out a government that had brought in a carbon tax much like British Columbia’s, and they voted in a government that repealed the tax. Earlier this year, the Swiss voted down new carbon taxes in a referendum.

Perhaps the biggest reason why people around the world don’t want green taxes is political distrust. Even though such taxes have a great track record, people simply don’t trust governments to make good use of taxes–of any kind. They worry that tax revenues disappear into the pockets of politicians and bureaucrats, never to be seen again. Some think it’s unfair to tax people for behaviours that are hard to avoid–like heating your home or catching a flight for the occasional family holiday. So they don’t like green taxes, and that’s true even though most people say they believe in the seriousness of climate change, and of environmental problems generally.

To illustrate the point, in an experiment I conducted in Britain last year, I randomly assigned survey respondents to different versions of a question about their willingness to pay higher taxes to protect the environment. People were much more open to the idea if they were told that other taxes they pay would be reduced to compensate. So it seems that revenue neutrality can win over a lot of people. But telling respondents that the offsetting cuts to other taxes were only a government “promise” reduced much of the positive impact of revenue-neutrality. Clearly, government promises don’t cut much weight, at least with Britons. (Experiments with other populations elsewhere are ongoing.)

For that reason, along with alerting people to all the ways in which people are doing serious harm to the environment globally and locally, it would also be good to get the word out about the many environmental policies that have been tremendously successful. Globally, we've built a regime to stop depleting the ozone layer; many countries have reduced acid rain dramatically; some formerly endangered species are no longer endangered. If more people thought about how much good past environmental policies have done, they might be more inclined to support efforts to do more.
-----------------------------------------
This blog is written by Cabot Institute member Dr Malcolm Fairbrother, from the School of Geographical Sciences at the University of Bristol.  This blog has been reposted with kind permission from Policy Trajectories, the blog of the American Sociological Association’s Section on Comparative and Historical Sociology.
This blog is part of a COP21 daily report series. View other blogs in the series below:

Wednesday 2 December: Reflecting on the science of climate change

Thursday 3 December: The politics and culture of climate change


Friday 4 December: Be brave, work together and involve the next generation

Monday 7 December: While the politicians negotiate, the science does not stop