Is population growth good or bad for economic development? Part 1 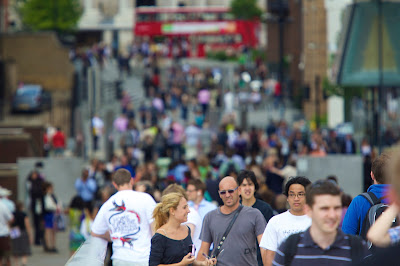 The relationship between population growth and economic development has been a recurrent theme in economic analysis since at least 1798 when Thomas Malthus famously argued that population growth would depress living standards in the long run. The theory was simple: given that there is a fixed quantity of land, population growth will eventually reduce the amount of resources that each individual can consume, ultimately resulting in disease, starvation, and war. The way to avoid such unfortunate outcomes was ‘moral restraint’ (i.e. refraining from having too many children). He didn’t foresee the technological advances that would raise agricultural productivity and reduce the toll of infectious diseases—advances that have enabled the world’s population to grow from 1 billion in 1798 to 7.4 billion today.


given that there is a fixed quantity of land, population growth will eventually reduce the amount of resources that each individual can consume, ultimately resulting in disease, starvation, and war.


At that time, the general view of economists was that high birth rates and rapid population growth in poor countries would divert scarce capital away from savings and investment, thereby placing a drag on economic development. They hypothesized that larger families have fewer aggregate resources and fewer resources per child. Larger families therefore spread their resources more thinly to support more children. This leaves less for saving and investing in growth-enhancing activities. It also reduces spending on enhancing the economic potential of each child (e.g. through education and health expenditures).

In the aggregate, these household level consequences of high birth rates were believed to exert a significant negative effect on per capita income growth ([i],[ii],[iii]).


high birth rates and rapid population growth in poor countries would divert scarce capital away from savings and investment, thereby placing a drag on economic development

This view underpinned the major rise in international funding for family planning in the 1960s and 1970s, with the aim of reducing birth rates and hence rates of population growth.

Writing in Science in 1980, Julian Simon summarised this research, emphasising that “[e]mpirical studies find no statistical correlation between countries’ population growth and their per capita economic growth”. Indeed, he maintained long run effects were positive ([vi]). This more sanguine view influenced the policy position of the US government at the World Population Conference in Mexico City in 1984—namely that “population growth is, by itself, a neutral phenomenon [with respect to economic growth]” ([vii]). This view arguably contributed to a major fall in international funding for family planning programs, beginning in the 1990s ([viii]).

But the story doesn’t end there. In the 1990s researchers made two discoveries that questioned the neutrality of population growth with respect to economic development. First, analyses of the remarkable economic trajectory of East Asian countries in the late 20th century suggested a sizeable fraction of their impressive economic growth was attributable to high levels of savings and investment facilitated by earlier fertility declines ([ix], [x]). Second, new research suggested that there was in fact a negative association between population growth and economic performance.


When fertility rates decline over a sustained period of time the proportion of the working age population (i.e. over 15) grows relative to the economically dependent youth population. This change in age composition creates a window of opportunity during which a country can potentially raise its level of savings and investment—a phenomenon now known as the ‘demographic dividend’. This finding prompted a subsequent reconsideration of the potential importance of reducing fertility in pursuit of growth.


change in age composition creates a window of opportunity during which a country can potentially raise its level of savings and investment—a phenomenon now known as the ‘demographic dividend’.

The second key discovery in the 1990s was the emergence of a negative correlation between population growth and economic growth in further analyses of international cross-sectional data ([xi], [xii]). In 2001, Birdsall and Sinding summarised the new position, stating that “in contrast to assessments over the last several decades, rapid population growth is found to have exercised a quantitatively important negative impact on the pace of aggregate economic growth in developing countries” ([xiii]). A recent meta-analysis of this research concluded that a negative relationship emerged in the post-1980 data, and that its strength has increased with time ([xiv]).
Moreover, as Figure 1 illustrates, the simple cross-sectional relationship between population growth and economic growth is clearly negative when viewed over the long run (i.e. 1950-2008).

Next time: Can economic history settle the debate between demographers and economists?


What explains the discrepancy between the early research, which found little evidence of a relationship between population growth and economic growth in cross-sectional data, and more recent work which finds a negative and significant one? We will tackle this question in our next post, which examines the unique economic history of the 20th century, and how this might help explain why economists seem to keep changing their mind—and why demography is more important than ever in a post-2008 global economy.
-----------------------------------------
This blog is written by Cabot Institute member Dr Sean Fox from the University of Bristol's School of Geographical Sciences.  Read part two.

[vii] Policy Statement of the United States of America at the United Nations International Conference on Population, reproduced in Popul. Dev. Rev. 10 (3), 574 (1984).