Is population growth good or bad for economic development? Part 2

By Cabot Institute for the Environment December 16, 2015
This blog has been reposted with kind permission from the LSE International Growth Centre blog.  In the previous post we described the shifting views of economists and demographers regarding the relationship between population growth and economic development. In short, rapid population growth in developing countries was thought to be a problem in the 1950s and 1960s, irrelevant (or even positive) in the 1970s and 1980s, and again an obstacle to robust economic growth from the mid-1990s up until today. Moreover, these changing views were very much in line with the evidence available for each period. How can we explain this?
------------------------------- 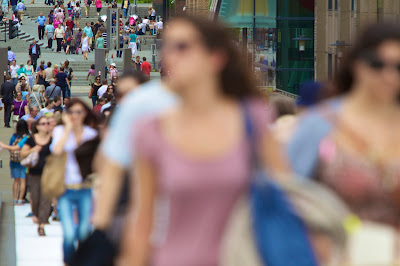 There is currently no consensus on the matter. But we argue that this is an instance where historical context really matters for models of economic development and interpreting empirical data.

The post-WWII boom and bust


Since the end of World War Two, there have been two quite distinct sub-periods to world economic growth, which are well documented by economic historians ([i],[ii]). The first was the post-war economic boom, which ended around 1973. As Table 1 shows, the global economy grew very rapidly between 1950 and 1973. Indeed, wealth was created more quickly during this period than any other—either before or since.

It was an era of extraordinary political and economic change characterised by decolonisation, the rapid diffusion of knowledge and technology around the world, booming international trade, and high levels of public and private investment in the growing number of sovereign nations. It was also a period of historically unprecedented population growth, driven in large part by rapid declines in death rates, primarily in poorer countries.
This all changed in the early 1970s. The collapse of the Bretton Woods system and rising inflation exposed the world economy to the risk of recession—a risk that was realised with the first Arab oil embargo in 1973. A further oil price shock in 1977, a series of debt crises in developing economies in the 1980s, and the disintegration of the USSR around 1990 led to a sustained period of economic malaise, with the notable exception of rapid growth in some East Asian countries.

Between 1973 and 1990 in particular, global GDP per capita growth slowed considerably. Despite a slight recovery between 1990 and 2008, GDP per capita never regained the momentum of the post-war ‘Golden Age’. Since 2008, global growth has been downright miserable.


In considering these trends, two key observations must be made. First, accelerated population growth in the post-war boom years was stimulated largely by the diffusion of medical knowledge, technologies, and public health initiatives that dramatically reduced death rates from infectious and parasitic diseases ([iii],[iv]). This coincided with a period of rapid economic growth. However, importantly, sustained improvements in mortality did not depend on sustained economic growth. Among other things, this is evident from the fact that there is no obvious correspondence in Table 1 between population growth rates and GDP growth rates at the global level.


sustained improvements in mortality did not depend on sustained economic growth

Second, in a surging world economy (i.e. between 1950 and 1973) poorer countries benefited from a positive investment environment and burgeoning employment opportunities. At both the household level and the aggregate macroeconomic level this buoyant economic environment likely helped mitigate the economic strains associated with the larger family sizes and accelerated population growth that characterised the period.


After 1973, mortality continued to decline in most countries despite stagnating output. This meant that, in the aggregate, there was less output produced (e.g. income) per person. Sluggish global growth also meant that the pie of investment and employment opportunities shrank, rendering larger families a greater economic liability at both the household and the macroeconomic level.

With less income-earning opportunities, but the same number of children, households must cut spending—in some cases they may even need to pull children from school and put them to work. In the aggregate, this translates into lower savings, less investment, and a workforce that may ultimately be less productive (if less educated or unhealthy).

In sum, the negative impacts of rapid population growth were masked in the earlier period by a buoyant global economy and mortality decline that happened to accompany rapid economic growth, but was not ultimately dependent upon this growth. When this unique episode of global economic history came to an end in 1973, the underlying negative association between population growth rates and economic growth rates was revealed.

We can see this in Table 2, which presents a very simple regression model periodised in line with our interpretation of the role of history in shaping the statistical relationship between population growth and economic growth. We look at changes in the relationship over the entire time period, and within each of the two discrete economic periods outlined in the historical analysis above.

In column 1, we find a clear negative and statistically significant correlation between these variables when considered over the long run (i.e. between 1950 and 2008) and controlling for initial GDP per capita. In column 2, which covers the economic boom period from 1950 to 1973, we find no statistically significant relationship between these variables. The negative and highly statistically significant relationship returns, however, when we consider the period of economic slow-down after 1973, as we expected.
This model is clearly highly stylised: economic growth performance depends on a wide range of factors beyond population dynamics, such as investment, trade, education, and the quality of political and economic institutions. Our key point is that properly periodising the simple cross-sectional models that have been at the heart of so much debate (and policy) provides some important insight into the matter.

If our interpretation of the data is correct—i.e. if global economic circumstances do indeed mediate the relationship between demographic change and economic performance—then the post-2008 regime of weak global growth doesn't bode well for poor countries with high birth rates.

While there has been a modest resurgence of interest in family planning initiatives among international development organisations in recent years, much more could be done to ensure that all adults (and women in particular) have the means to choose how many children they have. Indeed, the UN estimates that today there are about 225 million women who do not want to become pregnant, but are not using safe and effective means of family planning.

The challenge is a particularly urgent for many countries in Africa and the Middle East—where the potential micro and macroeconomic benefits of reducing very high fertility levels are likely to be considerable.


All data up to 2008 used in these posts were derived from Angus Maddison’s Statistics on World Population, GDP and Per Capita GDP, 1-2008 AD; data for 2008-2014 is from the World Bank’s World Development Indicators. Our sample for Figure 1 and the Table 2 consists of all countries with a population of 5 million or more in 2008 for which data were available. 102 countries fit these criteria and collectively represent 94% of the world’s population.