Climate negotiations: From Paris to Marrakech and… Trump?

By Cabot Institute for the Environment January 05, 2017
A few weeks ago, Morocco hosted the Twenty-second Conference of the Parties on Climate Change (COP22), which meant to become the "COP for action". One of the main challenges of this edition was setting the stage for the implementation of the Paris Agreement, adopted by the UNFCCC parties last December. 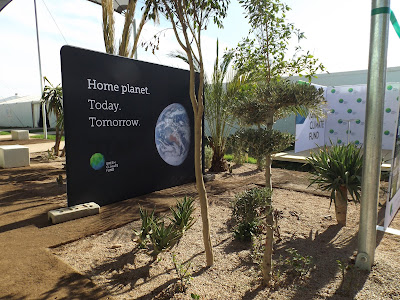 After the unexpected early entry into force of the Agreement, the COP22 sought to transform Paris discussions into reality and to develop concrete guidelines for achieving the 1.5°C goal. However, this call for climate action was disrupted on its second day by the outcome of the elections in the United States: someone who thinks climate change is a Chinese hoax was elected President of the Unites States.

When I arrived in Marrakech, I was not sure what to expect from the COP22 after that black Tuesday. The scenario was disappointing, but so predictable at the same time; besides the statements of countries such as China, Japan and the European Union ratifying their commitment to the fight against climate change (with or without the U.S. in the game), there was still an odd combination of uncertainty and sadness among delegates. These feelings were definitely projected onto the negotiations.

Broadly speaking, speculation overshadowed the final decisions of subsidiary bodies of the Convention and the governing body of the Paris Agreement (CMA).  They came out with generic final decisions, sometimes focused on procedural matters under the Paris Agreement and the rules of the Convention of Climate Change. In some other cases, they surprisingly postponed discussions to the next subsidiary bodies meetings in Bonn (May 2017) and, for topics such as the linkages between the Technology Mechanism and the Financial Mechanism to accelerate and enhance climate technology development and transfer, they agreed to bring it back again to the agenda at the twenty-fourth session in 2018.

But why? The answer is aggressively simple: Gaining time. By far, the U.S -one of the crucial players in the game of tackling Climate Change- has been leading a wide range of initiatives together with the European Union, China, Canada and Mexico, to name a few. It is understandable from an international perspective, that nations are anxious to know if, after this transition period, the U.S. will still be part of the team or abandon the game. 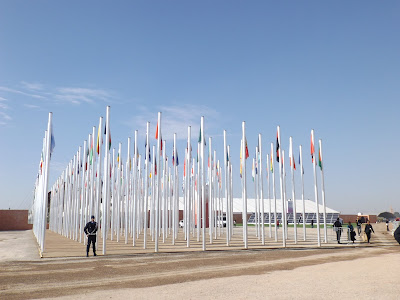 At COP22, the first press brief of the U.S. was delivered by Jonathan Pershing, U.S. Special Envoy on Climate Change. He stressed the importance of transitioning from negotiation to implementation and qualified as ‘immature’ speculating about the new administration and what actions they would take. But rumors of President elected Trump appointing a climate change destroyer as the head of the EPA were annoying many delegations in Marrakech.

The COP22 appeared to be a Conference for merely presenting initiatives agreed between the UNFCCC Parties, using the Paris Agreement goals as a guideline, rather than defining pathways for implementing the legal instrument itself. However, we should keep an eye on strategies such as the ‘2050 Pathways Platform’ presented by national and subnational entities as well as the private sector, to reach a deep decarbonisation towards the middle of the century; and the Global Partnership on Renewable Energy and Energy Efficiency launched by the least developed countries (LDCs) to speed up the clean energy transition.

In terms of climate finance, countries such as Canada, Denmark, the European Union, Germany, Italy, Japan, Korea, Switzerland and the United States announced a $23 million contribution to the Climate Technology Centre and Network (CTCN) of the UNFCCC to facilitate and accelerate climate change mitigation and adaptation measures in developing countries.

Patricia Espinosa, the Executive Secretary of the UNFCCC, remarked the importance of the deployment of clean and green technologies for the implementation of the Paris Agreement and the achievement of the Sustainable Development Goals (SGDs). She also stressed that “Finance will also be key if deployment is to happen at the speed and scale required”.

Although these initiatives can give us hope for the upcoming years, we should bear in mind that some pieces are still missing in the climate change puzzle.  Many countries are still deciding the roadmap for implementing their nationally determined contributions (NDC), whose achievements should be evaluated every five years; and the Ad Hoc Group of the Paris Agreement (APA) has not yet defined the rulebook for the implementation of the Agreement, nor the accountability rules to ensure a transparent and flexible process of monitoring and verification of those targets.

The international community agrees with the IPCC that climate change needs to be addressed now in order to achieve the well below 2 degrees aim. It is widely acknowledged that there is no time to lose, so why does time seem to have frozen for those in the frontlines of climate negotiations? Why they are still trapped in an endless loop of bickering?

During Education Day, Youth representatives raised their voices to say: We refuse to accept that this is over! And I am one of them. This is just the beginning of an era in which all sectors, from youth to the private sector, have to take the lead. We cannot base our decisions on childish statements from a democratically empowered billionaire and lose precious time. The clock is ticking, if we don’t take action now, there won’t be anything left to fight for in the near future. 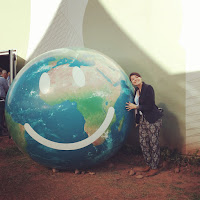 Thanks to the Coordination Unit of International Affairs at the Mexican Ministry of the Environment and Natural Resources (SEMARNAT) for the opportunity of being part of the Mexican Delegation.